Insect of the Week – Wheat midge

For more information on the wheat midge, visit our Insect of the Week page.

Access the complete Weekly Update either as a series of Posts for Week 7 (Jun 15, 2017) OR a downloadable PDF version.

Subscribe to the Blog by following these easy steps! 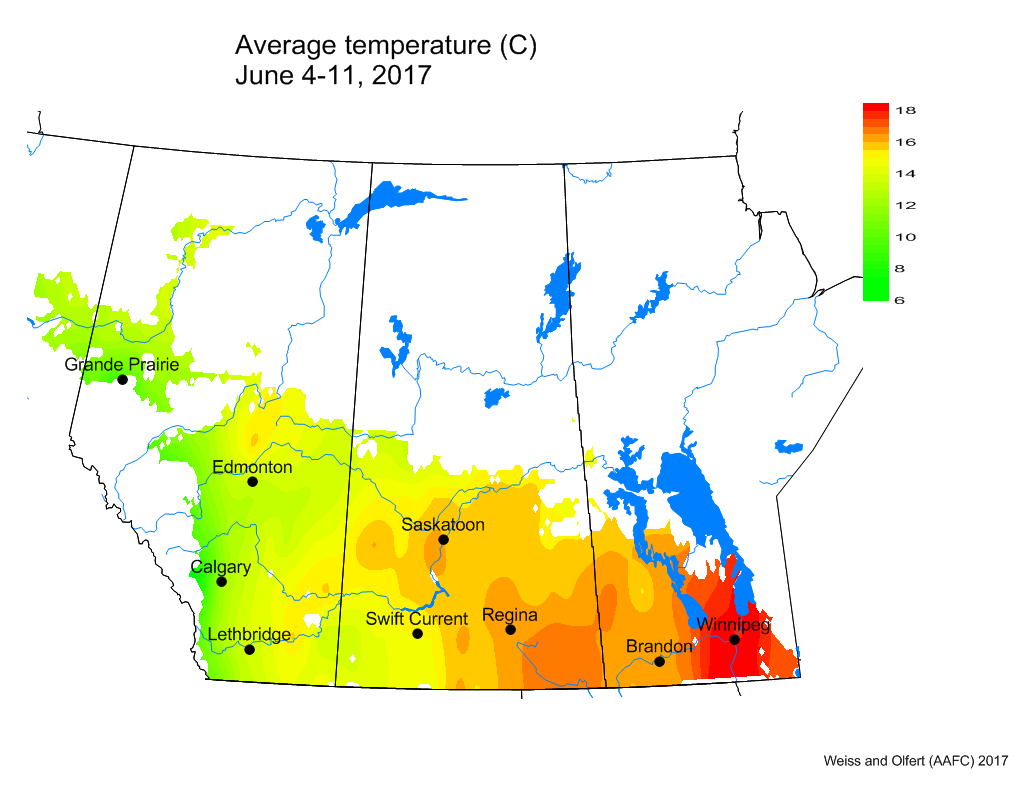 This second map presents the 30 Day Average Temperature. Average temperatures were greatest in southern regions of Manitoba and central Alberta. 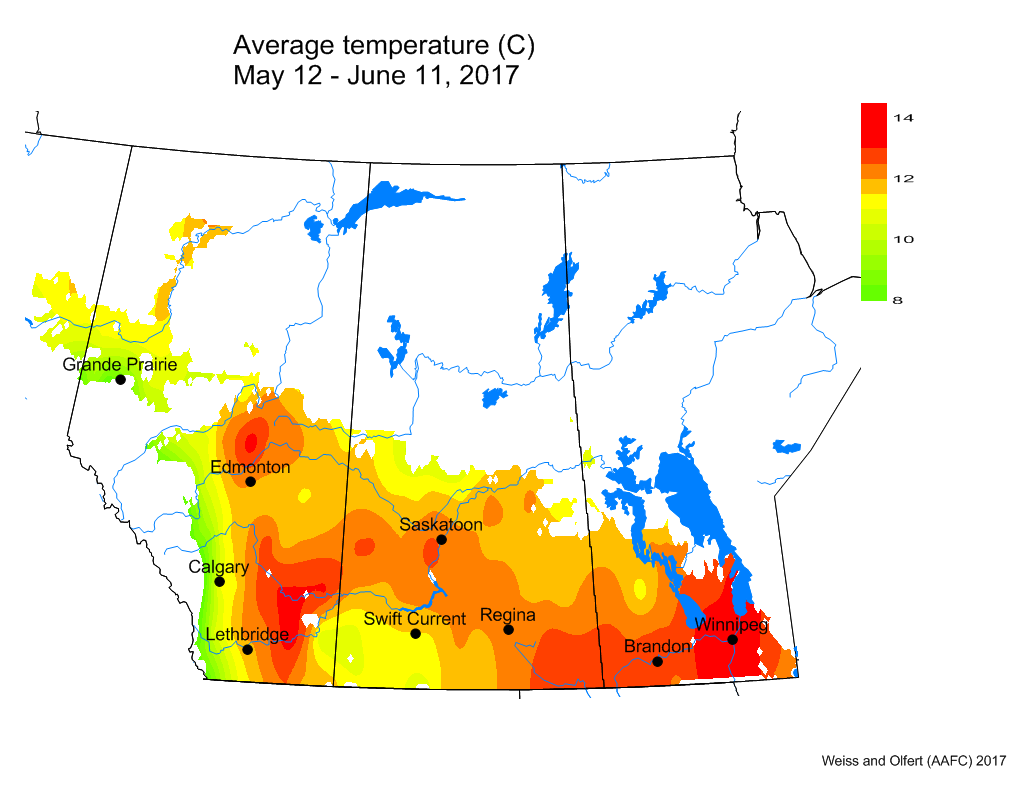 The map below indicates that 7 Day Accumulated Precipitation was greatest across Alberta while central and southern Saskatchewan continued to be dry. 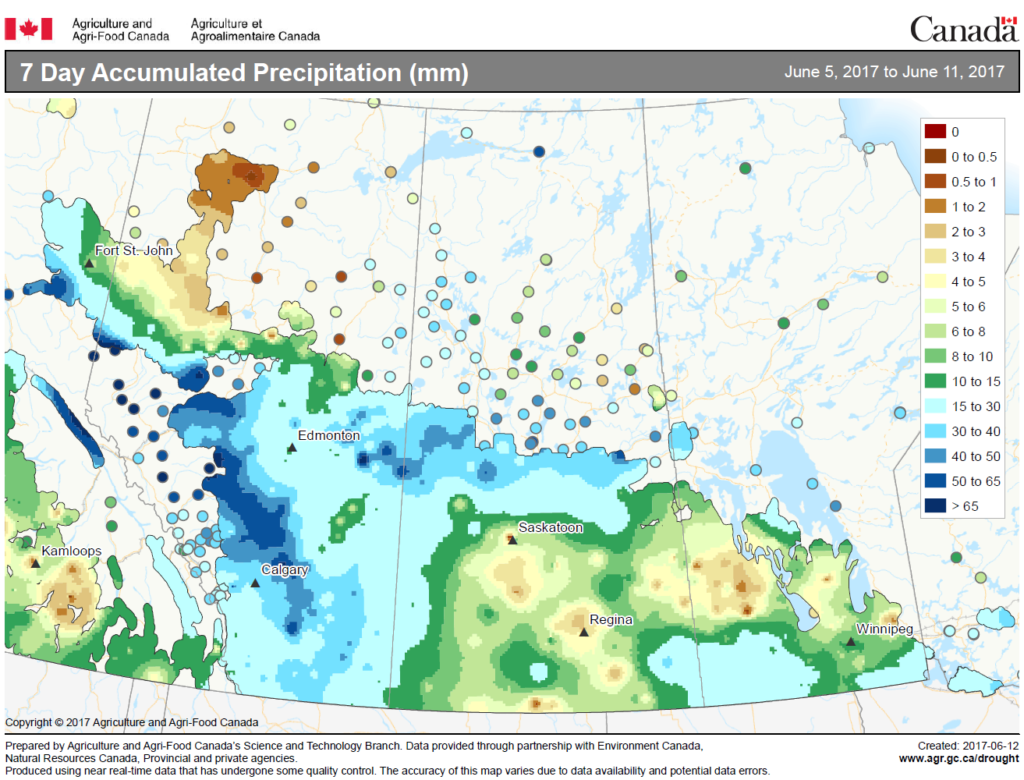 The map below indicates that the rainfall amounts for the past month (May 13 – June 11) were average to above-average in Alberta and below-average for Manitoba and Saskatchewan. 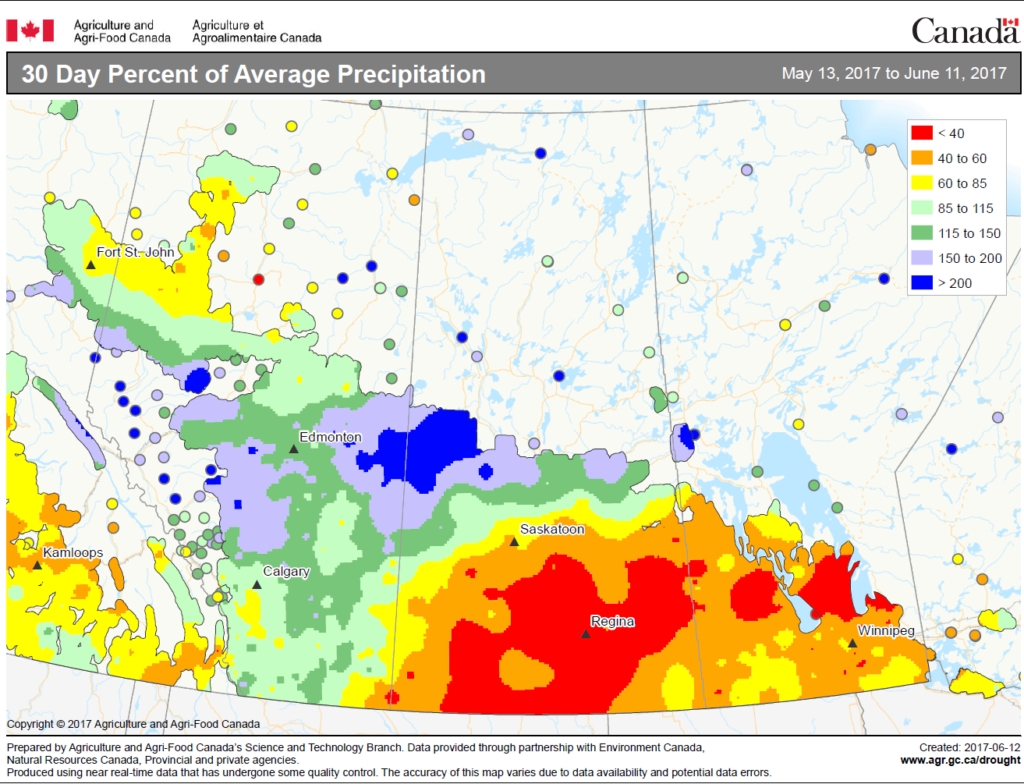 Grasshopper Simulation Model Output – Simulation modelling is used to predict grasshopper development across the prairies. Weekly temperature data is incorporated into the model which calculates estimates of grasshopper development stages based on biological parameters for Melanoplus sanguinipes (Migratory grasshopper). Predicted hatch for June 11, 2017, was 52% (23% last week) with 32% of the population in the first instar, 15% second instar and 15% third instar. 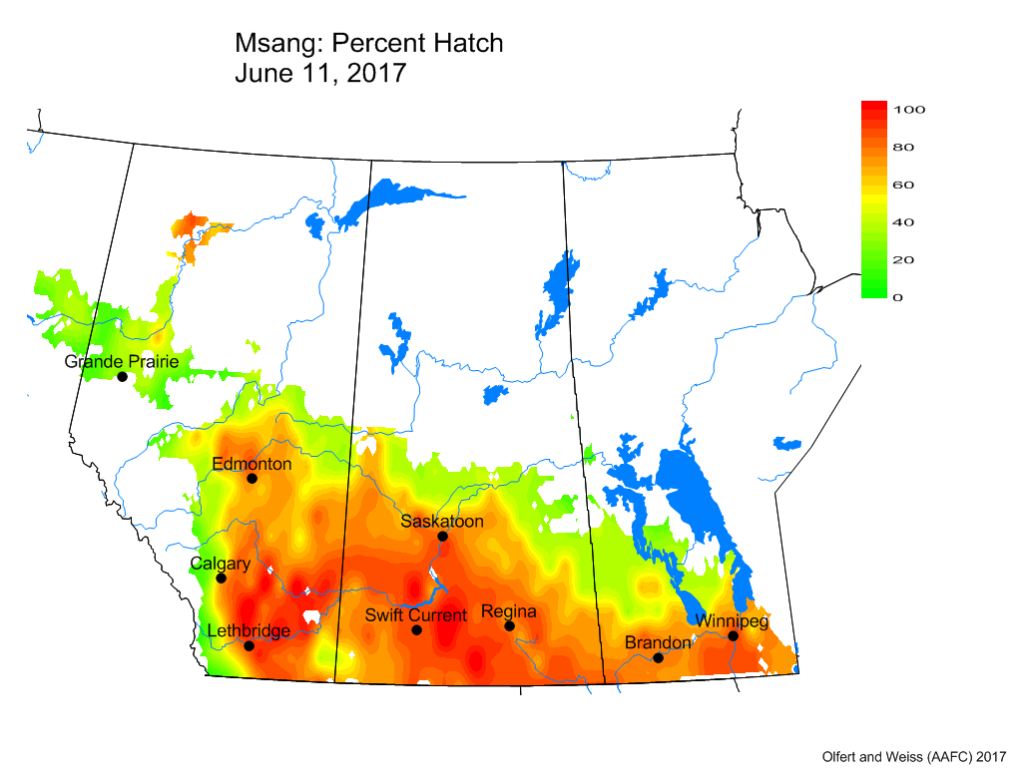 The greatest development was predicted to be across southern regions in all three provinces, particularly southeastern Alberta and a region extending south from Swift Current/Regina to the US border. 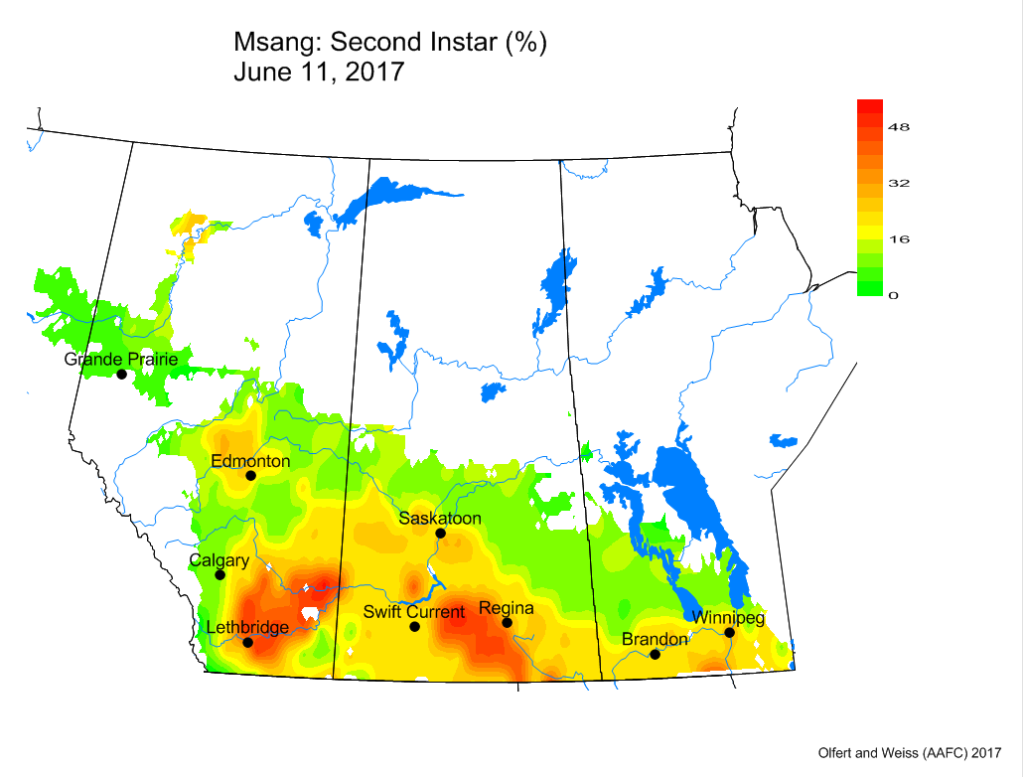 Grasshopper populations near Saskatoon were predicted to be primarily in the second instar with appearance of some third and fourth instars. This week’s survey (southwest of Saskatoon) agreed with model predictions with first collections of a few fourth instars. 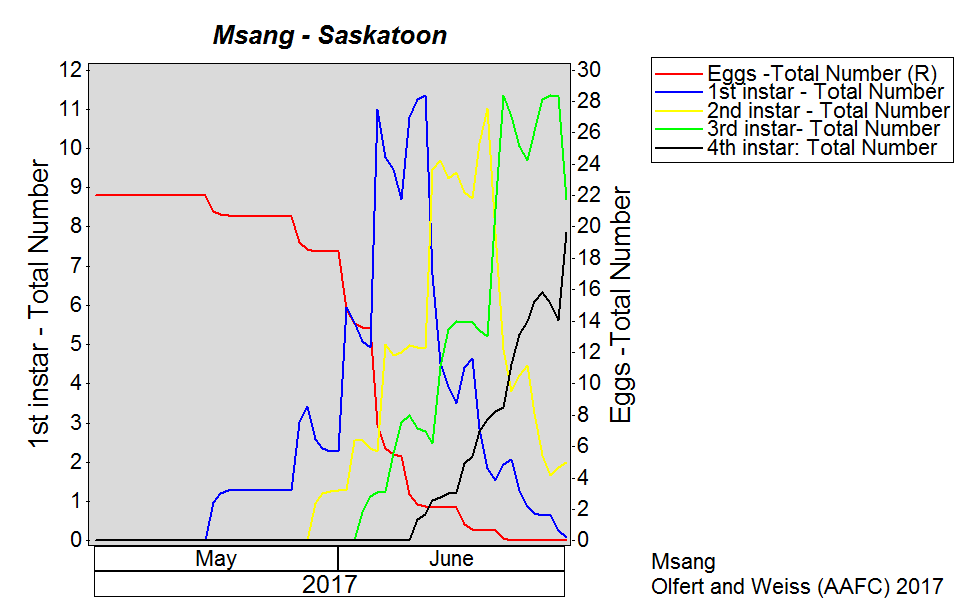 Model output for Grande Prairie indicates that development continues to be approximately 10 days later than locations across the southern prairies. 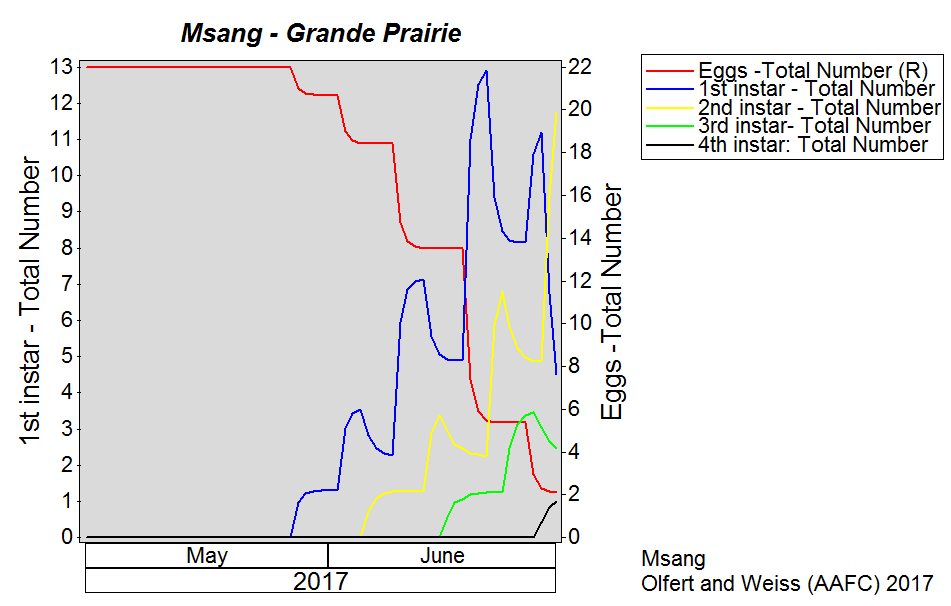 Reminder:  Biological and monitoring information related to grasshoppers in field crops is posted by Manitoba Agriculture, Food and Rural Development, Saskatchewan Agriculture, Alberta Agriculture and Forestry, the BC Ministry of Agriculture and the Prairie Pest Monitoring Network.  Also refer to the grasshopper pages within the new “Field Crop and Forage Pests and their Natural Enemies in Western Canada: Identification and management field guide” as an English-enhanced or French-enhanced version.

Bertha armyworm (Lepidoptera: Mamestra configurata) – Emergence of adult moths is well underway. The map illustrates predicted appearance of adults (percent of the population) across the southern prairies; oviposition is predicted to begin this week with first hatch beginning later next week. 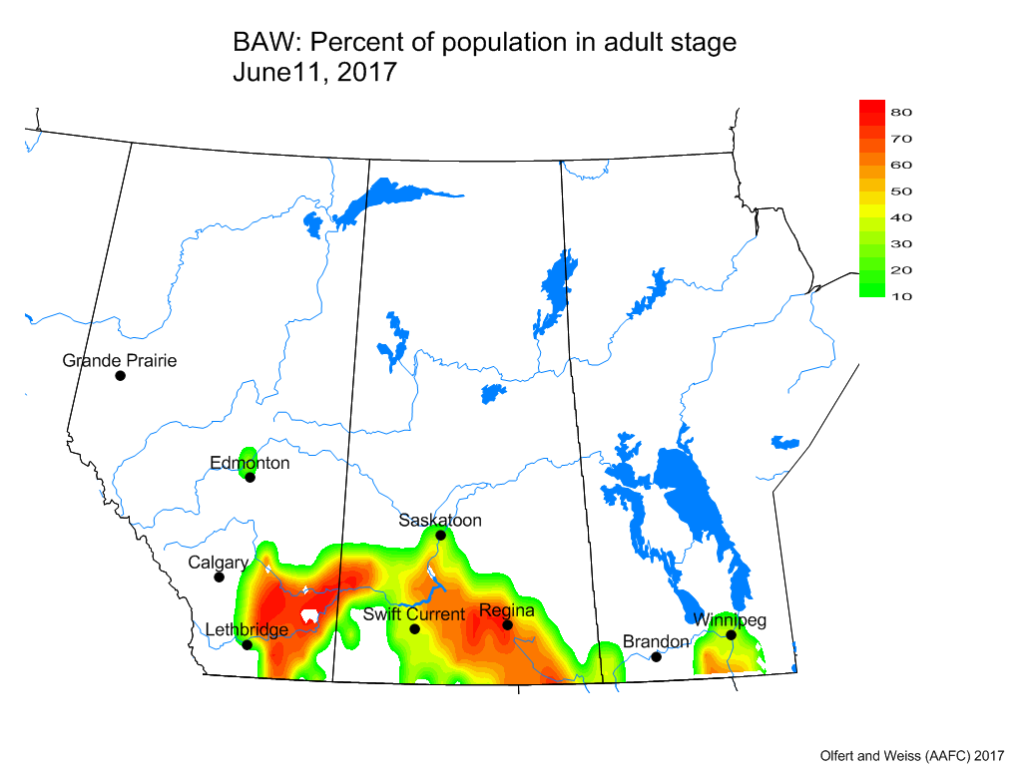 For those of you monitoring BAW pheromone traps, you may want to compare trap “catches” to the following reference photo kindly shared by Saskatchewan Agriculture: 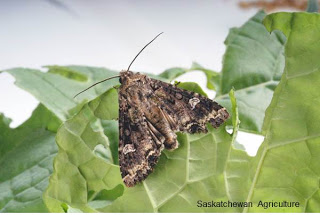 Biological and monitoring information related to bertha armyworm in field crops is posted by the provinces of Manitoba, Saskatchewan, Alberta and the Prairie Pest Monitoring Network.  Also refer to the bertha armyworm pages within the new “Field Crop and Forage Pests and their Natural Enemies in Western Canada: Identification and management field guide” – both English-enhanced or French-enhanced versions are available.


Simulation modelling is used to predict wheat midge emergence across the Canadian prairies.  The model predicted that wheat midge adults should emerge in July. The following graphs indicate that adult emergence at Saskatoon (Fig. 1) could be two weeks later than at Melfort (Fig. 2). Though average temperatures have been similar for both locations, model output indicates that dry conditions at Saskatoon (6 mm since June 1) may result in delayed emergence. Adequate moisture at Melfort (20 mm since June 1) has resulted in expected emergence patterns. Predicted rainfall for this week should result in emergence patterns that are more typical.


As a refresher, the 2017 wheat midge forecast map circulated in January can be accessed at our Risk and Forecast Maps Post.  Information related to wheat midge biology and monitoring can be accessed by linking to your provincial fact sheet (Saskatchewan Agriculture or Alberta Agriculture & Forestry).  A review of wheat midge on the Canadian prairies was published by Elliott, Olfert, and Hartley in 2011.

More information about Wheat midge can be found by accessing the pages from the new “Field Crop and Forage Pests and their Natural Enemies in Western Canada: Identification and Field Guide”.  View ONLY the Wheat midge pages but remember the guide is available as a free downloadable document as both an English-enhanced or French-enhanced version.

Pea Leaf Weevil (Sitona lineatus) – Oviposition is predicted to have peaked across central and southern regions of Alberta and Saskatchewan.  Hatch should be underway in pea fields near Lethbridge while hatching is predicted to occur this week near Saskatoon. 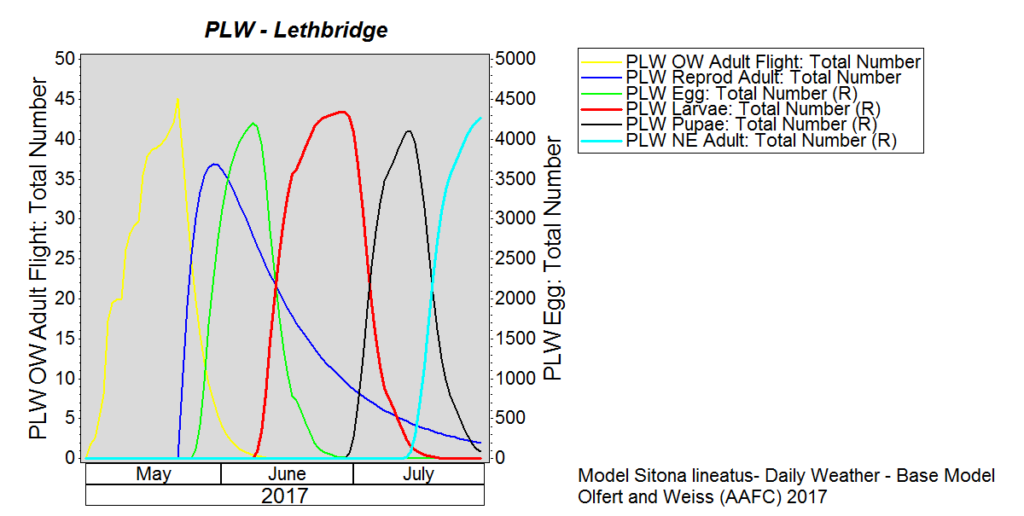 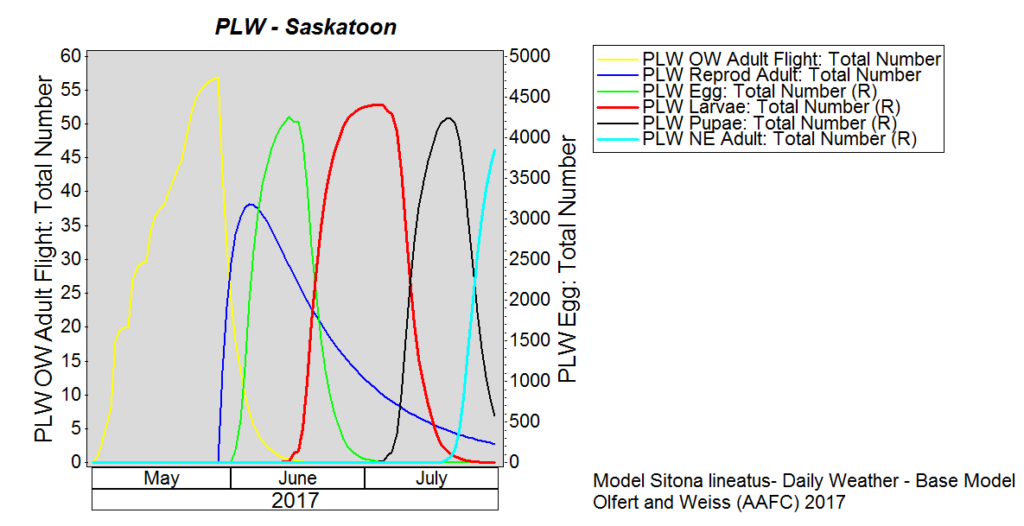 Biological and monitoring information related to pea leaf weevil in field crops is posted by the province of Alberta and a NEWLY UPDATED PPMN monitoring protocol is available!


Also refer to the pea leaf weevil page within the “Field Crop and Forage Pests and their Natural Enemies in Western Canada: Identification and management field guide” – both English-enhanced or French-enhanced versions are available.  A review of this insect was published in 2011 in Prairie Soils and Crops by Carcamo and Vankosky.

Alfalfa Weevil (Hypera postica) – Recent warm weather has resulted in rapid alfalfa weevil development. Model output indicates that 98% of the hatch is complete (less than 80% last week). Larval populations should be predominantly in the second (35%) and third (46%) instars. 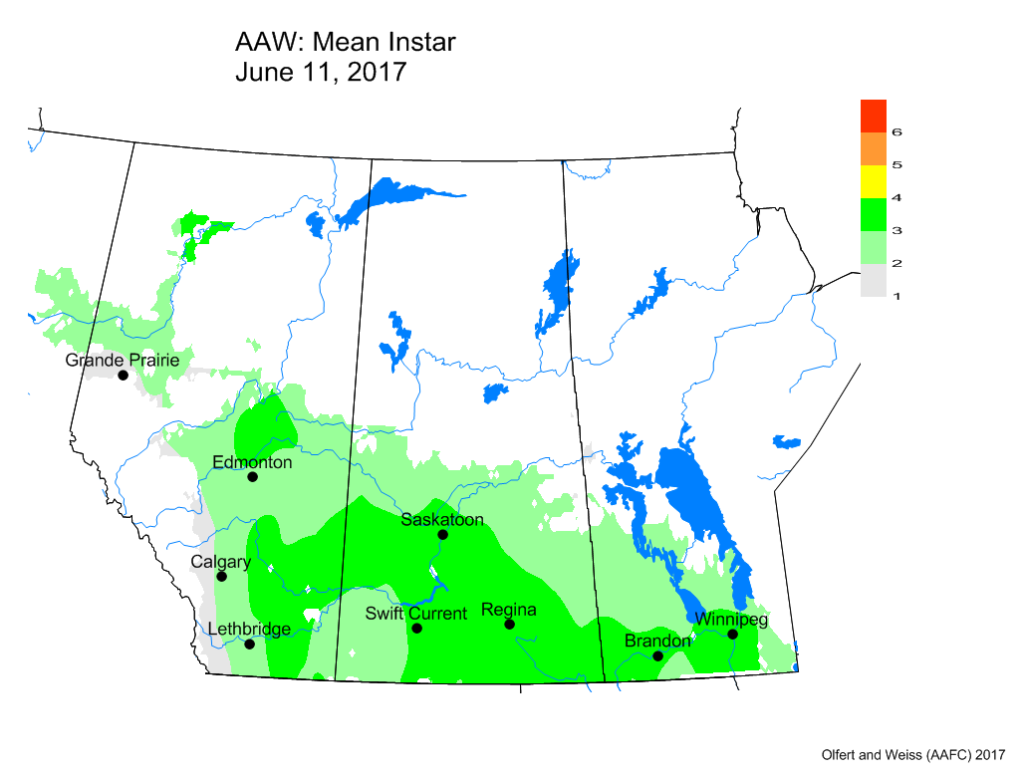 Alfalfa growers are encouraged to check the Alfalfa Weevil Fact Sheet prepared by Dr. Julie Soroka (AAFC-Saskatoon) and additional information can be accessed by reviewing the Alfalfa Weevil Page extracted from the “Field crop and forage pests and their natural enemies in western Canada – Identification and management field guide” (Philip et al. 2015).  That guide is available in both a free English-enhanced or French-enhanced version.


Recently, crop damage reports have been associated with a grub identified as the larvae of the beetle Aphodius distinctus (see below). This common beetle is not known to be a pest, but there is an ongoing effort to gather information to develop a ‘pest’ profile.  Additional information is online at Top Crop Manager. Please send reports of this insect and associated information to Dr. Kevin Floate (Agriculture and Agri-Food Canada, Lethbridge, AB). 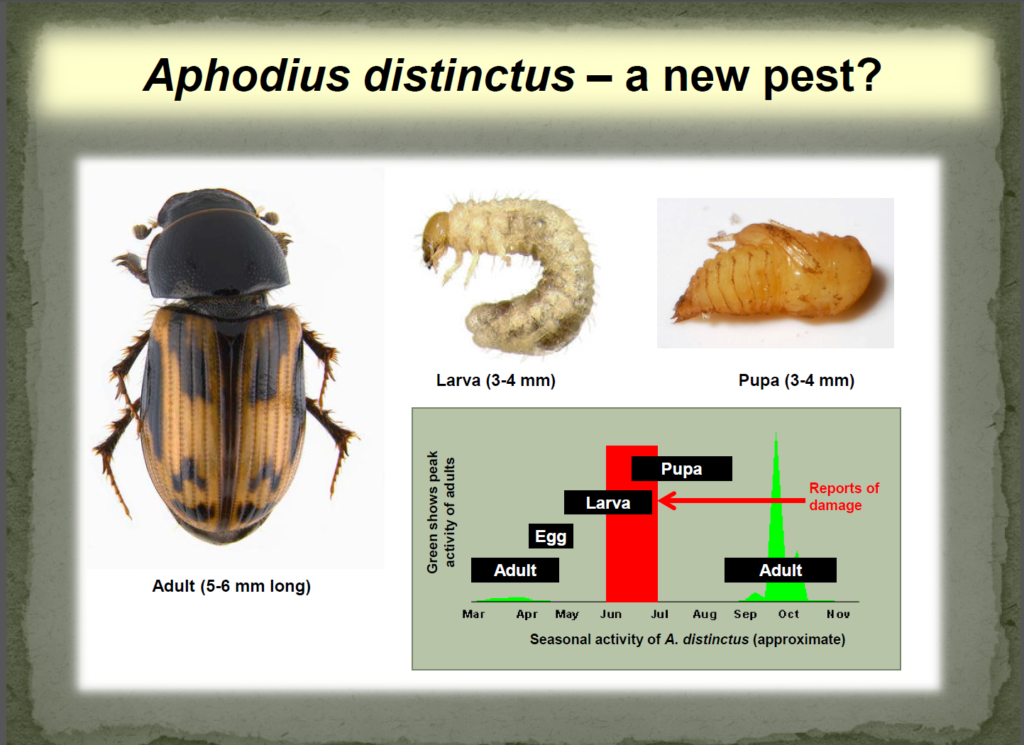 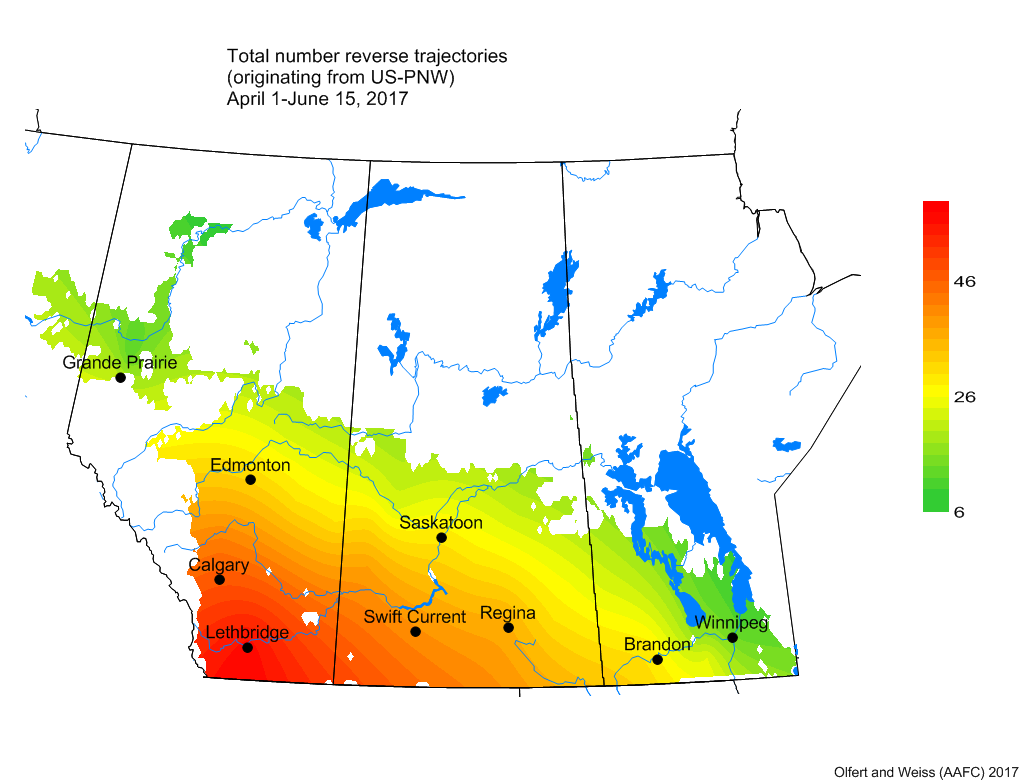 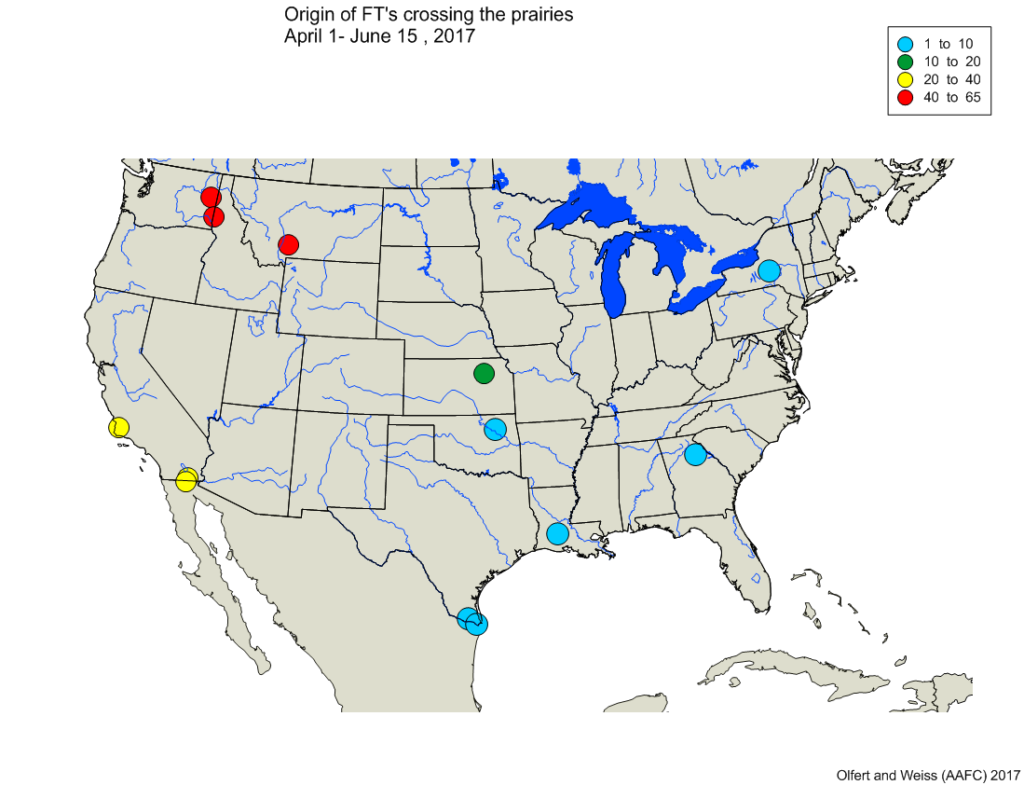 ● Watch for Alberta Agriculture and Forestry’s Call of the Land and access the most recent Insect Update provided by Scott Meers.