Welcome to the final Weekly Update of the 2017 growing season!


We wish everyone ‘Good Luck’ with the rest of the growing season and thank the many people who have been busy monitoring in fields!  The provincial entomologists, their many staff and cooperators, plus our AAFC Staff are all thanked for their ongoing efforts!  Watch the Blog for the annual risk and forecast maps in January and the Weekly Updates will be back in 2018.

Precipitation – Seven-day rainfall accumulations were greatest in central Alberta into Saskatchewan but also in eastern Saskatchewan and into Manitoba (Fig. 5).

Wheat surveying – As wheat is harvested, monitoring can begin for two wheat pests including wheat midge and wheat stem sawfly.  As soon as the combine passes through, in-field monitoring can commence with:
● Soil core sampling is used to assess the densities of wheat midge cocoons set to overwinter, PLUS
● The number of cut stems can be counted to determine the density of wheat stem sawfly.

By January, forecast and risk maps summarizing surveying efforts for the above pests will be available (e.g., check the Risk Map Page).


More information about these pests can be found by accessing the pages from the new “Field Crop and Forage Pests and their Natural Enemies in Western Canada: Identification and Field Guide”.  View ONLY the Wheat midge pages or ONLY the Wheat stem sawfly pages.  Remember the entire guide is available as a free downloadable document as both an English-enhanced or French-enhanced version.

Information related to wheat midge biology and monitoring can be accessed by linking to your provincial fact sheet (Saskatchewan Agriculture or Alberta Agriculture & Forestry) or the PPMN protocol.

The Canadian Grain Commission is ready and willing to grade grain samples harvested in 2017.  Samples are accepted up to November but send samples as soon a harvest is complete.

The Public Health Agency of Canada posts information related to West Nile Virus in Canada.  The map of clinical cases of West Nile Virus in Canada in 2017 is updated through the summer (screen shot of map below).  The Public Health Agency of Canada (PHAC), as of August 12, 2017, reported eight clinical cases (confirmed or probable) in Ontario and one asymptomatic infection in British Columbia.  All eight cases from ON are currently unclassified and two were travel-related. 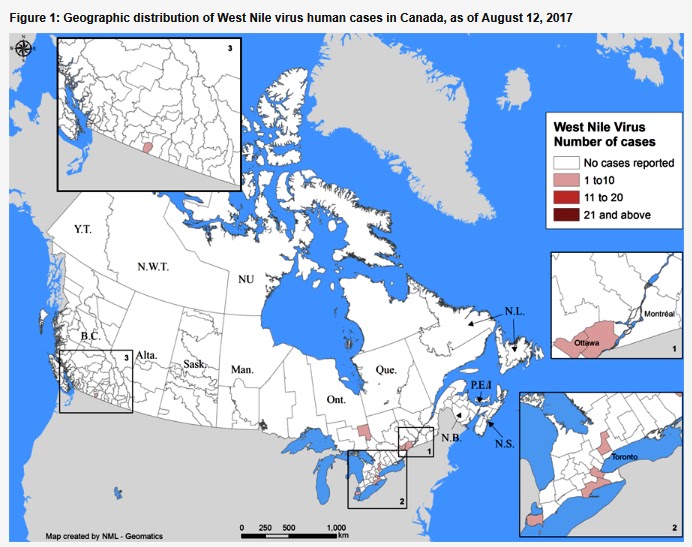 The Canadian Wildlife Health Cooperative compiles and posts information related to their disease surveillance for West Nile Virus in birds.  As of August 24, 2017, 1218 birds were examined and 58 tested positive for West Nile virus; three from Saskatchewan, two from Manitoba, 15 from Ontario, and 38 from Quebec.

The Public Health Agency of Canada also monitors and posts updates on the status of WNV in Mosquitoes.  As of August 12, 2017, Quebec, Ontario, Manitoba and Saskatchewan reported positive mosquito pools for West Nile Virus.


A total of 224 positive mosquito pools have been found:

Upcoming Meetings and Conferences – The following agricultural insect pest-related meetings and conferences will be held – be sure to re-confirm dates and details as events are finalized:

• September 28-30, 2017:  The Entomological Society of Alberta Annual Meeting will be held at Crowsnest Pass AB and information is available at: https://goo.gl/UN3ZN2

• October 25-27, 2017:  The Western Forum on Pest Management will be held at the Fairmont in Winnipeg MB and information is available at: https://goo.gl/Rf4T8G

• November 5-8, 2017:  The Entomological Society of America meets at Denver CO and information is available at: http://www.entsoc.org/am/fm/index


• November 7-8, 2017:  The Pulse and Soybean Agronomy Workshop will be held at Prairieland Park in Saskatoon SK.  More information is available on their website and view the agenda or register online.

• December 5-7, 2017:  The Canola Meeting & Canola Innovation Day, and the Canola Discovery Forum have united to create the first ever CanolaWeek in Saskatoon SK and more information is available at https://event-wizard.com/CanolaWeek2017/0/welcome/

• January 16-18, 2018: The Manitoba Ag Days show will be held at the Keystone Centre in Brandon MB. More information will be available at: https://www.agdays.com/

• January 16-19, 2018:  The Association of Alberta Agricultural Fieldmen will hold the 2018 Provincial ASB Conference in Grande Prairie AB. More information will be available at https://aaaf.ab.ca/asb-boards/asb-conference.html  or use links provided by Alberta Agriculture & Forestry.

• January 30-February 1, 2018:  FarmTech 2018 will be held in Edmonton AB and information is available at http://farmtechconference.com/  with registration typically opening early in November.

• March 19-22, 2018:  The 9th International IPM Symposium will be held in Baltimore MA and information is available at https://ipmsymposium.org/2018/

Ticks and Lyme disease
Time of swathing for canola – Week 16


● Manitoba’s Insect and Disease Update for 2017 is prepared by John Gavloski and Pratisara Bajracharya and read Issue #13 (posted August 16, 2017) noting soybean aphids as field near the R6 stage and high levels of bertha armyworm larvae from some fields in western Manitoba.

● Watch for Alberta Agriculture and Forestry’s Call of the Land and access the most recent Insect Update (August 24, 2017) provided by Scott Meers. That report describes wheat stem sawfly surveying underway that scouts for cut stems to assess risk for 2018, white fluff balls at the top of canola that are actually parasitoid puparia or soon-to-be beneficial wasps that attack then emerge from a lepidopteran host, and the emergence of new-season red turnip beetles that will overwinter this fall.

This week’s Insect of the Week is the brown marmorated stink bug (Halyomorpha halys). Stink bugs get their name from the foul odour they release when threatened. Nymphs and adults prefer field corn and soybean, but infestations have been reported on rape, pea, sunflower and cereals in the USA. They have also been known to attack tree fruits, berries, vegetables and many ornamental trees and shrubs. They are not known to be established in the Prairies, but have been found in the BC Southern Interior, Ontario and Quebec. Feeding causes damage to seeds and seed pods, reducing yield.