Across the prairies, weather conditions were warmer and wetter than long term average values for the period of June 6-13, 2016. The average temperature was 15°C and was approximately 2°C warmer than the previous week. 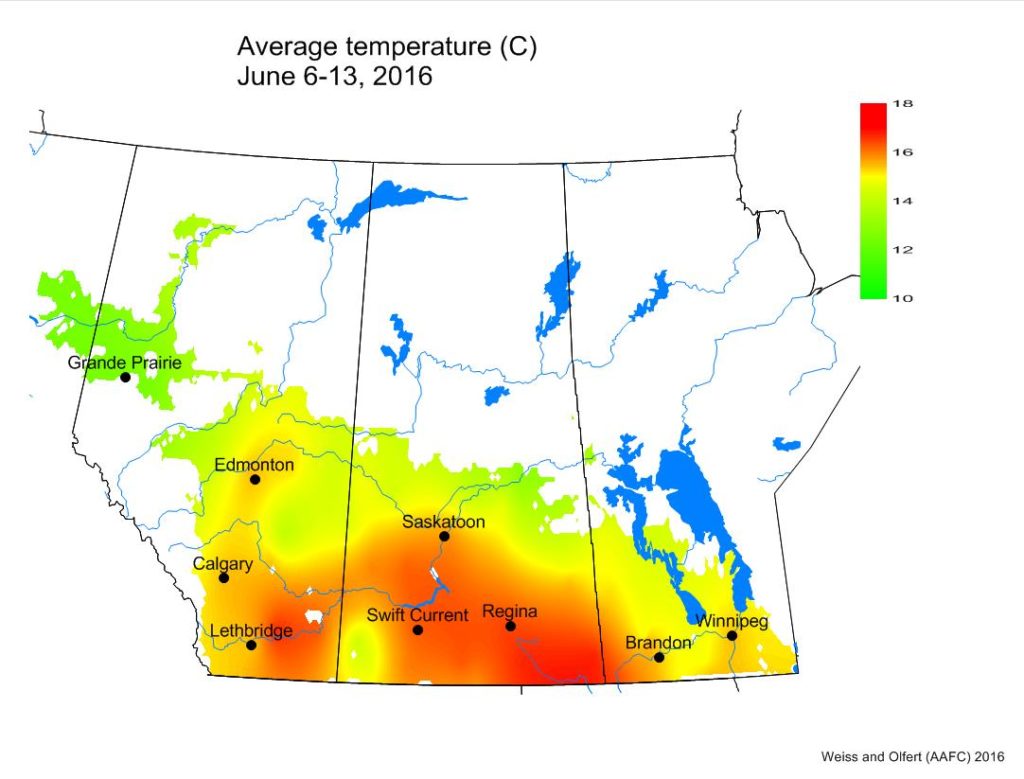 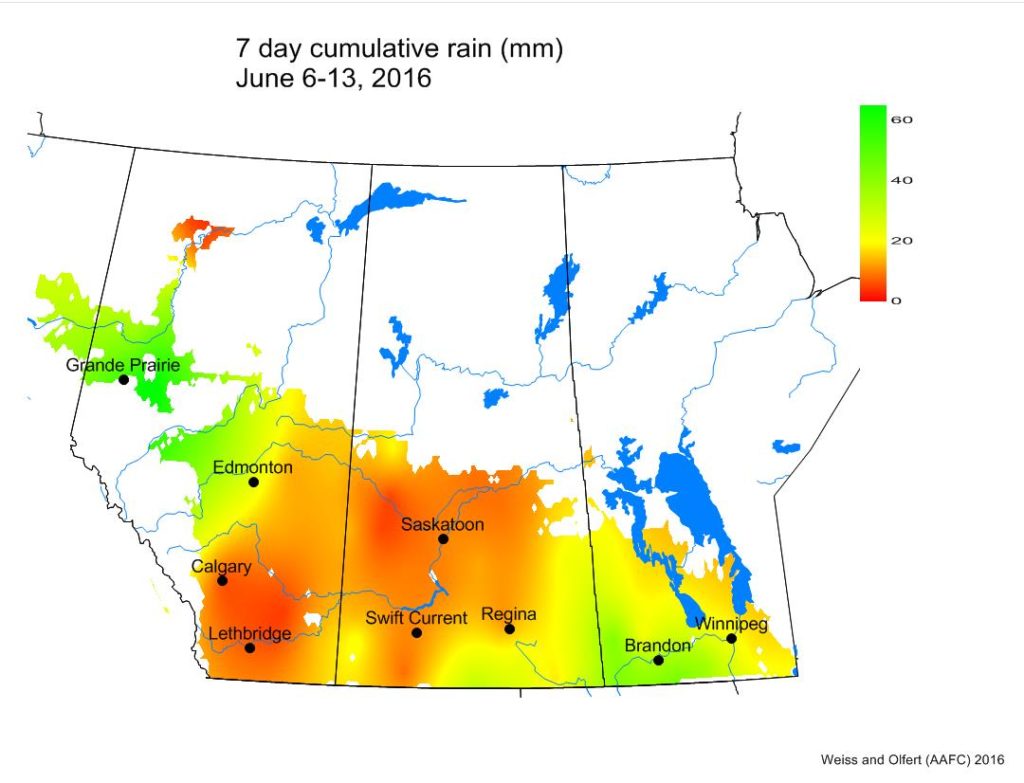 This week’s rainfall was generally greater than long term average amounts. For the 30 day period of May 14-June 13,  conditions were cooler in Alberta compared to Saskatchewan and Manitoba.  The area extending from Swift Current to Regina and north to Saskatoon continues to be the warmest/driest region of the prairies. 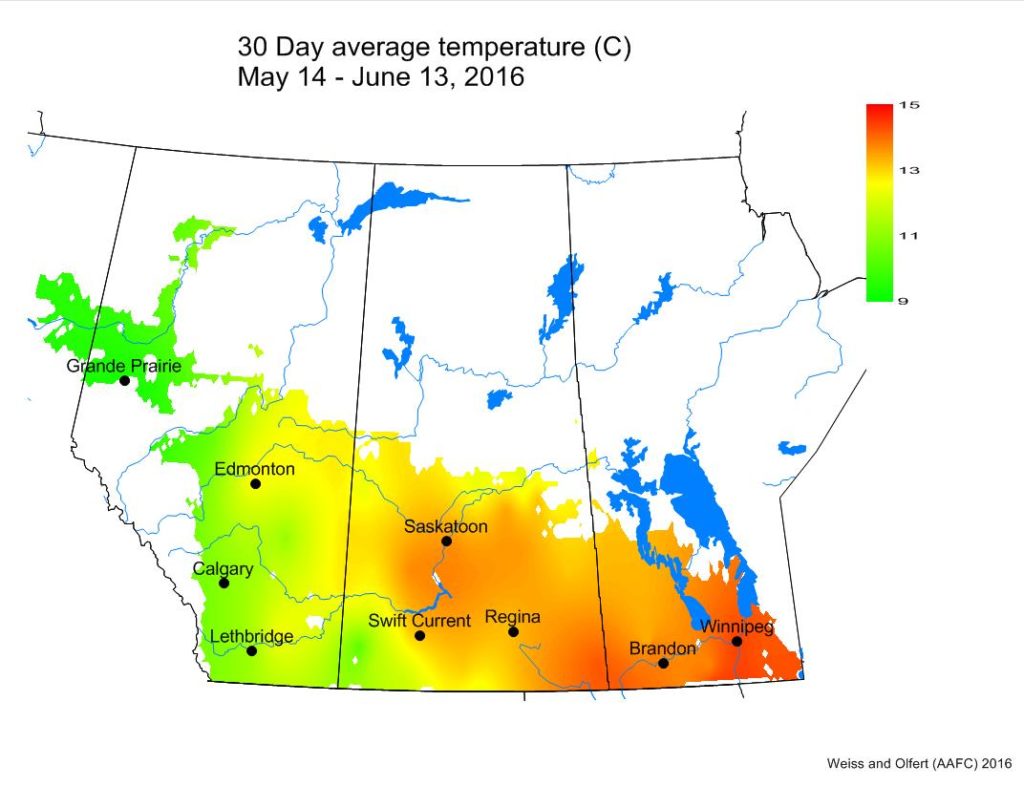 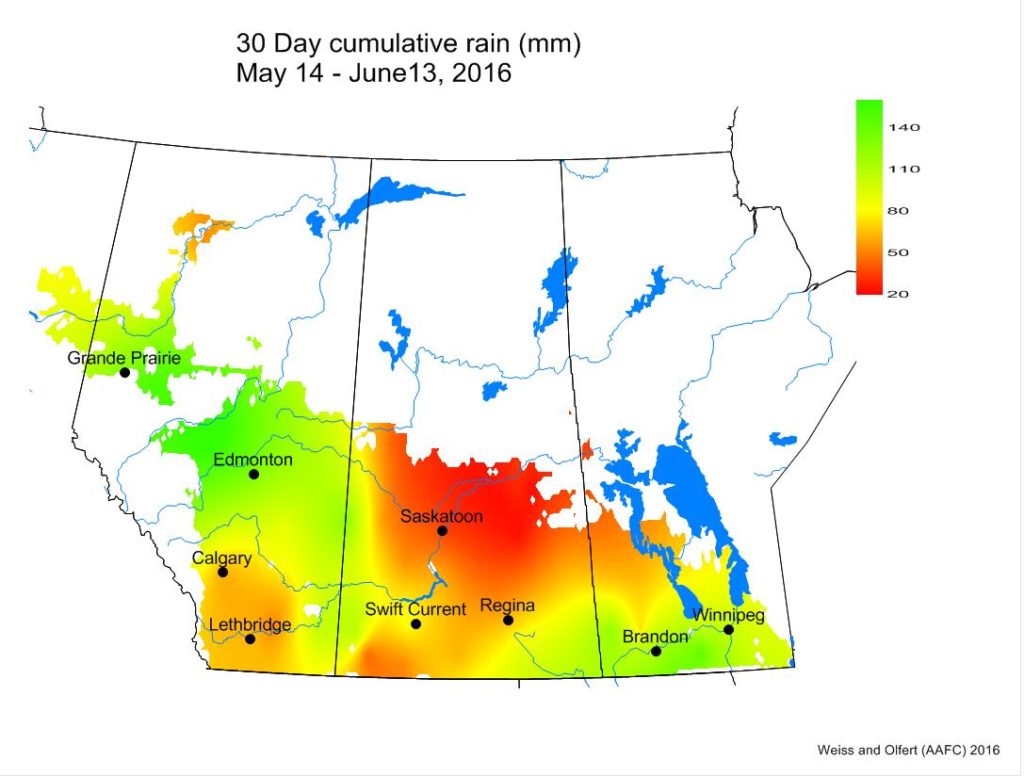 The map below reflects the Accumulated Precipitation for the Growing Season so far for the prairie provinces (i.e., April 1-June 14, 2016): 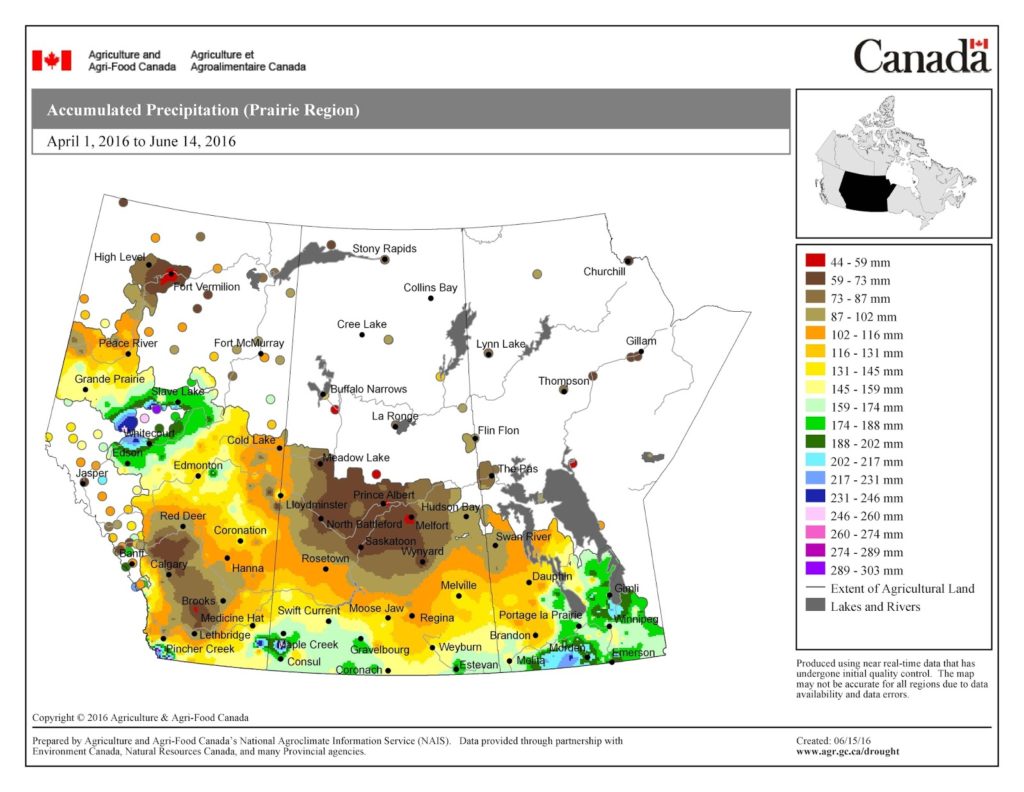 The map below reflects the Accumulated Precipitation the Past 7 Days for the prairie provinces (i.e., June 8-14, 2016): 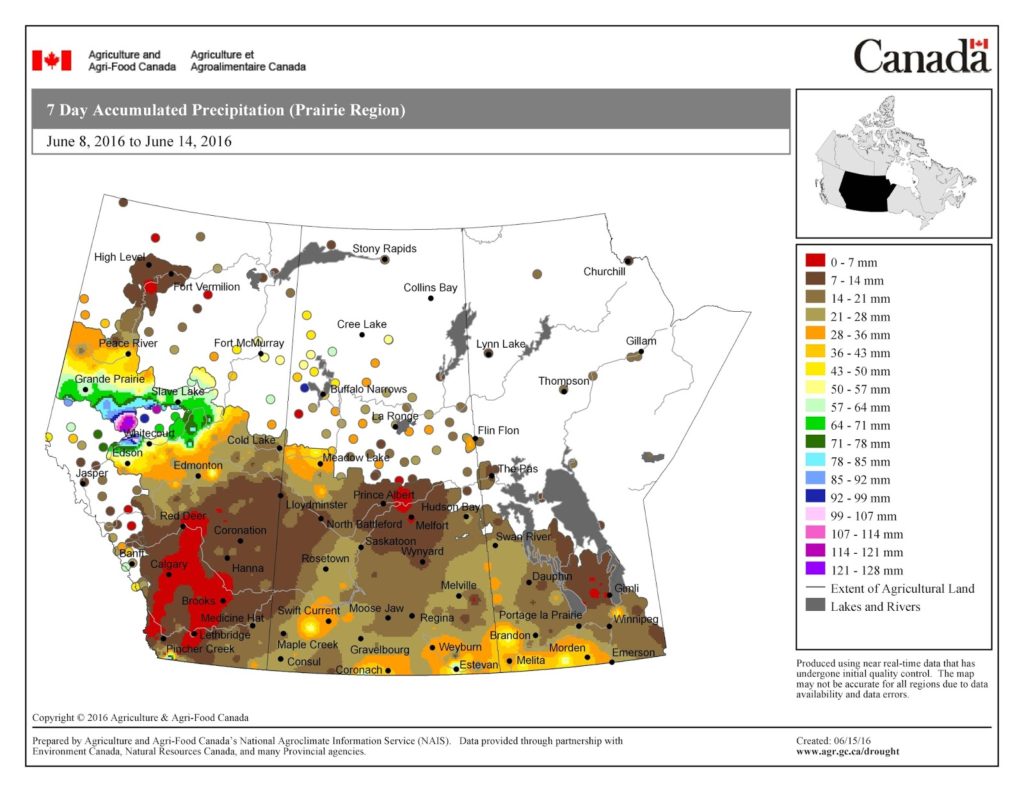 Compared to last week, overnight temperatures were warmer the past 7 days.  The map below shows the Lowest Temperatures the Past 7 Days (June 8-14, 2016) across the prairies: 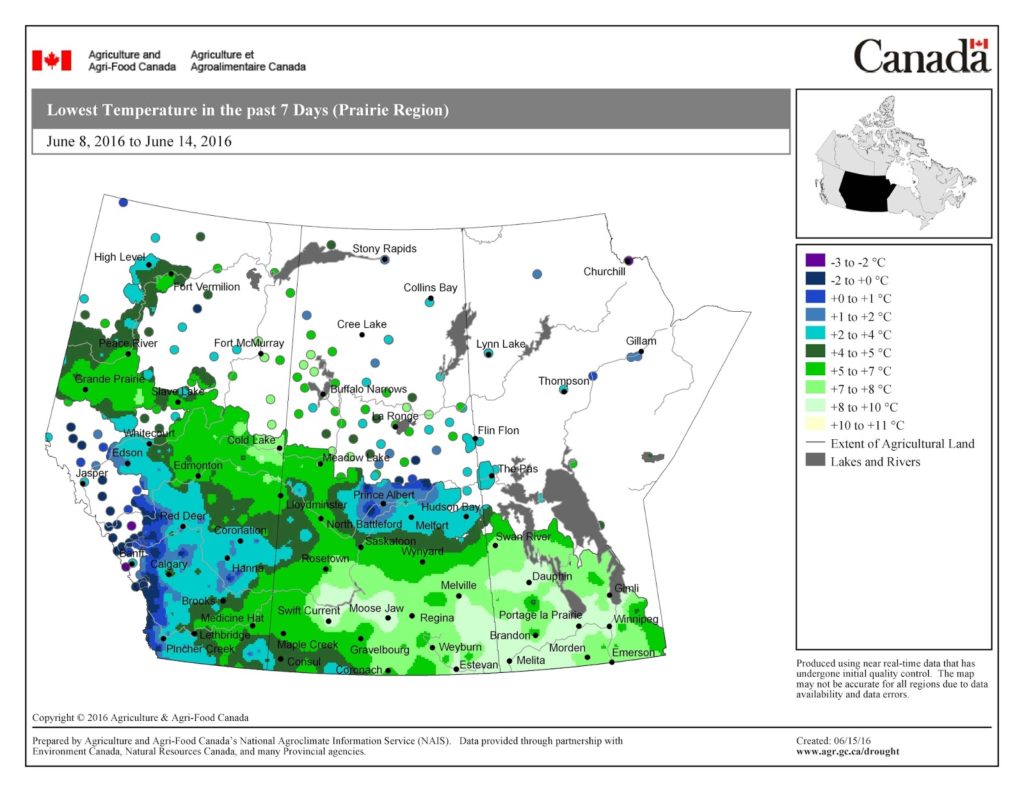 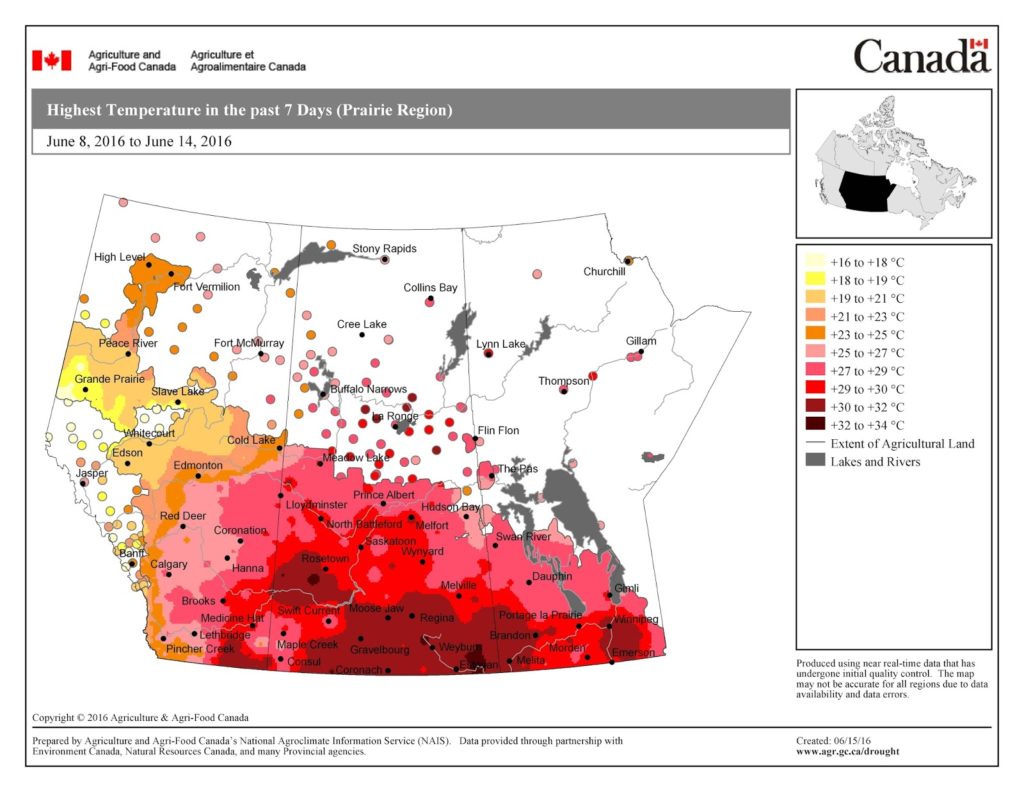 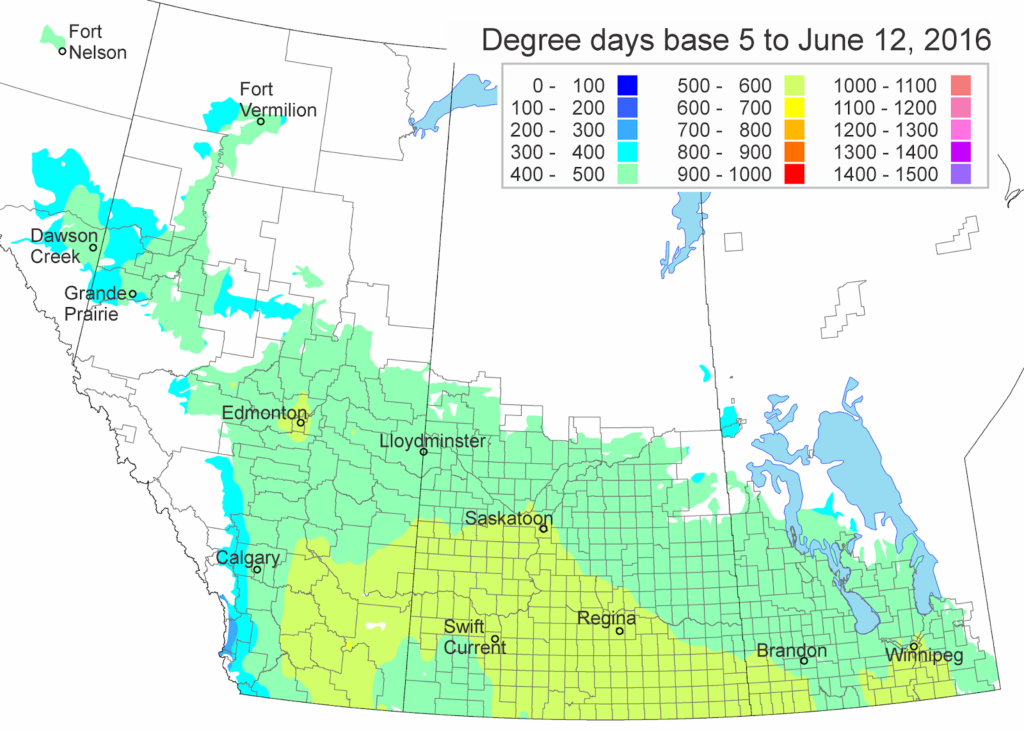 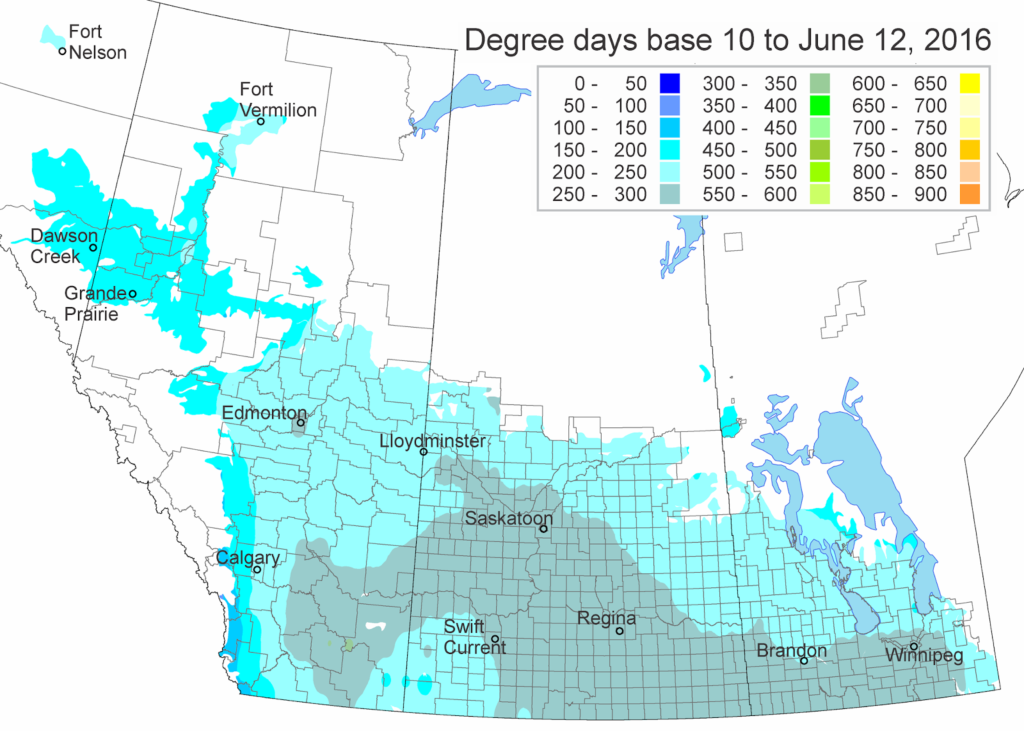 For Manitobans….The  earlier Insect Update included great photos of dingy and redbacked cutworms plus monitoring tips including how to discern these two species from one another.  Reports of cutworm continued in the current Insect Update.

For Saskatchewanians…. Cutworms were again reported in the recent Saskatchewan Insect Report.

For Albertans….. Additional reports of cutworms have occurred throughout the province the past week!  If you find cutworms, please consider using the Alberta Pest Surveillance Network’s “2016 Cutworm Reporting Tool”.  Once data entry occurs, your growers can view the live 2016 cutworm map.

A screen shot of the live map has been retrieved (15Jun2016) below for your reference. 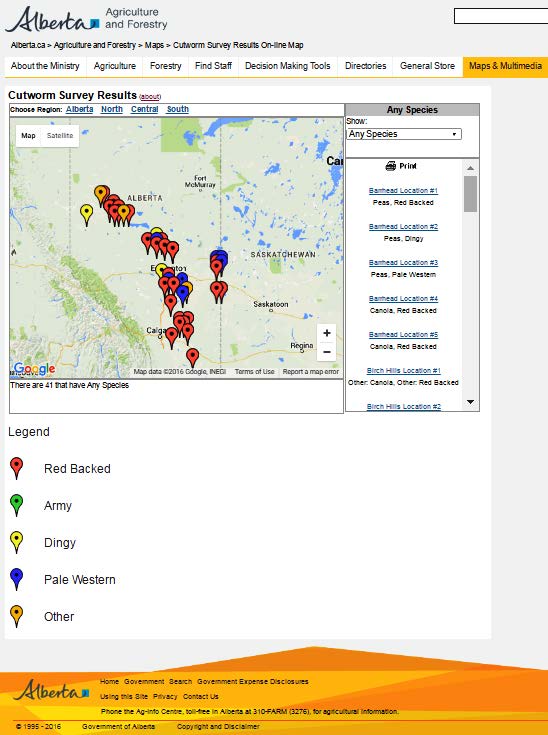 The following image showing various stages of the clearwinged grasshopper is provided below – note that adults have wings extending the length of the abdomen whereas nymphs lack wings but develop wing buds that will eventually mature to wings. 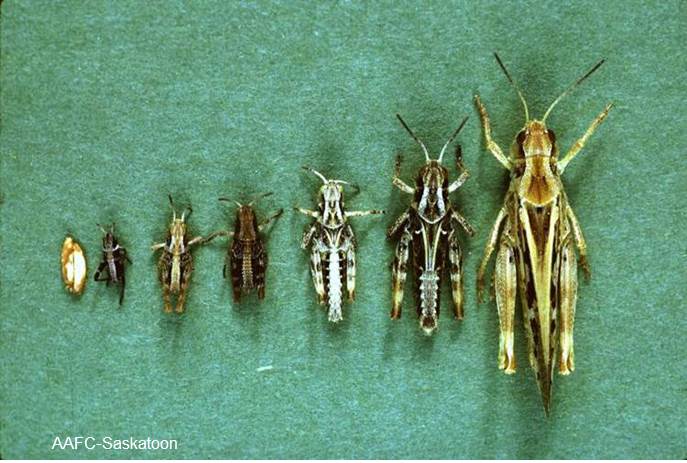 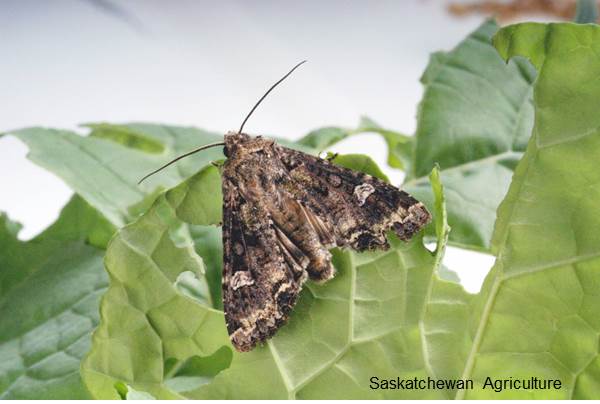 ● Albertans.…..  Refer to the live 2016 map reporting Bertha armyworm pheromone trap interceptions.  A copy of the map (retrieved June 15, 2016) is below for reference. 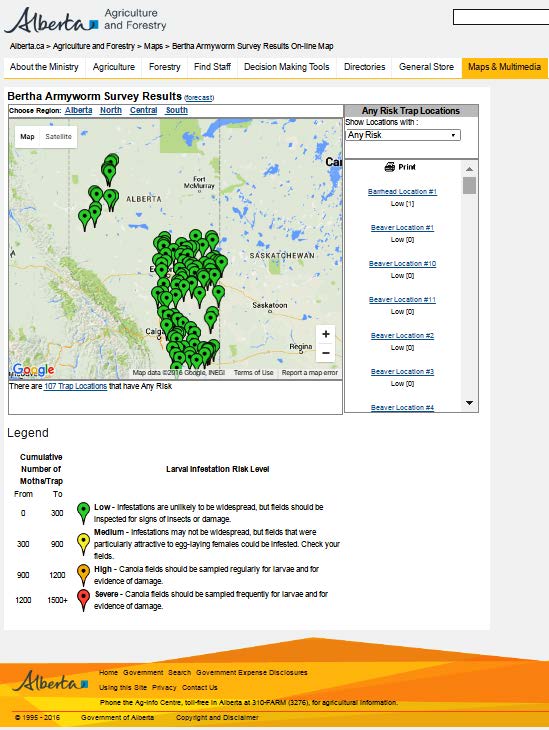 Swede midge (Contarinia nasturtii)  – Pheromone traps captured the first swede midge of 2016 between May 25 and 31 in northeastern Saskatchewan.  This is substantially earlier (6-7 weeks) compared to 2014 and 2015. The earlier emergence pattern is likely due to the mild winter and warm spring weather combined with adequate moisture levels. Emergence traps indicate a moderate number of swede midge have emerged near Carrot River, Saskatchewan, and producers should monitor their canola fields for damage symptoms. 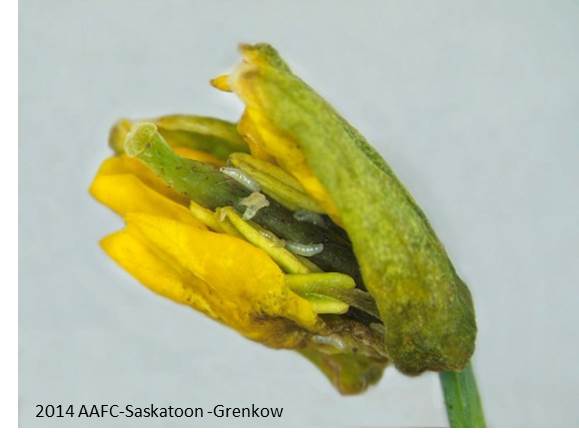 Swede midge scouting tips for in-field monitoring:
• Watch for unusual plant structures and plant discolourations then follow-up by closely scrutinizing the plant for larvae.
• The growing tip may become distorted and produce several growing tips or none at all, young leaves may become swollen, crinkled or crumpled and brown scarring caused by larval feeding may be seen on the leaf petioles and stems.
• Flowers may fail to open.
• Young plants that show unusual growth habits should be examined carefully for damage and larvae; especially if the sticky liners have many flies resembling midges (swede midges are about the size of orange blossom wheat midge but are not orange).
• Larvae can be seen with a hand lens.
• Refer to the Canola Watch article by Dr. Julie Soroka for more information on swede midge and watch for a new Ontario fact sheet produced by Baute et al. 2016.

Cabbage seedpod weevil (Ceutorhynchus obstrictus) –  There is one generation of CSPW per year and the overwintering stage is the adult which is an ash-grey weevil measuring 3-4mm long (Refer to lower left photo).  Adults typically overwinter in soil beneath leaf litter within shelter belts and roadside ditches.


They emerge from overwintering in the spring as soil temperatures warm to ~15°C.  CSPW utilize several flowering hosts including wild mustard, flixweed, hoary cress, stinkweed and volunteer canola.  CSPW move to canola during the bud to early flower stages and will feed on pollen and buds, causing flowers to die.


Adult feeding damage to buds is more evident in dry years when canola is unable to compensate for bud loss.  Adults mate following a pollen meal then the female will deposit a single egg through the wall of a developing pod or adjacent to a developing seed within the pod (refer to lower right photo).  Eggs are oval and an opaque white, each measuring ~1mm long.  Typically a single egg is laid per pod although, when CSPW densities are high, two or more eggs may be laid per pod.

There are four larval instar stages of the CSPW and each stage is white and grub-like in appearance ranging up to 5-6mm in length (refer to lower left photo).  The first instar larva feeds on the cuticle on the outside of the pod while the second instar larva bores into the pod, feeding on the developing seeds.  A single larva consumes about 5 canola seeds.  The mature larva chews a small, circular exit hole from which it drops to the soil surface and pupation takes place in the soil within an earthen cell.  Approximately 10 days later, the new adult emerges to feed on maturing canola pods.  Later in the season these new adults migrate to overwintering sites beyond the field.

Monitoring:  Begin sampling when the crop first enters the bud stage and continue through the flowering. Sweep net samples should be taken at ten locations within the field with ten 180° sweeps per location. Count the number of weevils at each location. Samples should be taken in the field perimeter as well as throughout the field.  Adults will invade fields from the margins and if infestations are high in the borders, application of an insecticide to the field margins may be effective in reducing the population to levels below which economic injury will occur.  An insecticide application is recommended when three to four weevils per sweep are collected and has been shown to be the most effective when canola is in the 10 to 20% bloom stage (2-4 days after flowering starts). Consider making insecticide applications late in the day to reduce the impact on pollinators.  Whenever possible, provide advanced warning of intended insecticide applications to commercial beekeepers operating in the vicinity to help protect foraging pollinators.  High numbers of adults in the fall may indicate the potential for economic infestations the following spring.

– Manitoba’s Insect and Disease Update (June 8, 2016, prepared by John Gavloski and Pratisara Bajracharya).
– Saskatchewan’s Insect Report which contains a reminder for cutworms (Issue 3, prepared by Scott Hartley).
– Watch for Alberta Agriculture and Forestry’s Call of the Land for updates from Scott Meers  who recently gave a summary (posted on June 9, 2016).

A downloadable PDF version of the complete Weekly Update for Week 7 (June 15, 2016) can be accessed here.

This edition includes the “Insect of the Week” featuring beneficial arthropods in 2016!

THE WEEK OF JUNE 13, 2016:  Wind trajectory data processing by AAFC-Saskatoon Staff began in April.  Reverse Trajectories track arriving air masses back to their point of origin while Forward Trajectories predict favourable winds expected to arrive across the Canadian Prairies for the week of  June 13, 2016:

Reverse trajectories (RT)
Mexico and southwest USA – This week, Grande Prairie (June 7) had the first report of a Reverse Trajectory crossing over southwest US and Mexico crossing. Other sites included Selkirk, Portage, Carman and Brandon.

The map below represents the distribution of RTs from the prairies that originated over southwest US and Mexico. 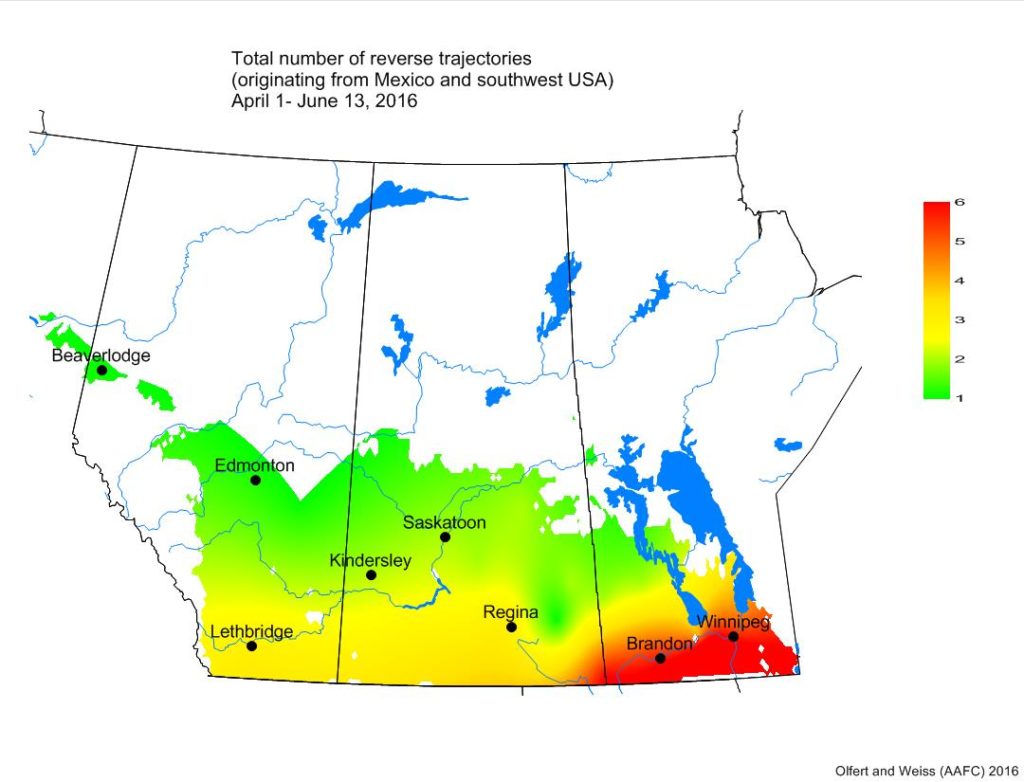 Forward trajectories (FT)
There were 17 Forward Trajectories from southwest US (12) and Mexico (5) that were predicted to cross the prairies over the next five days. 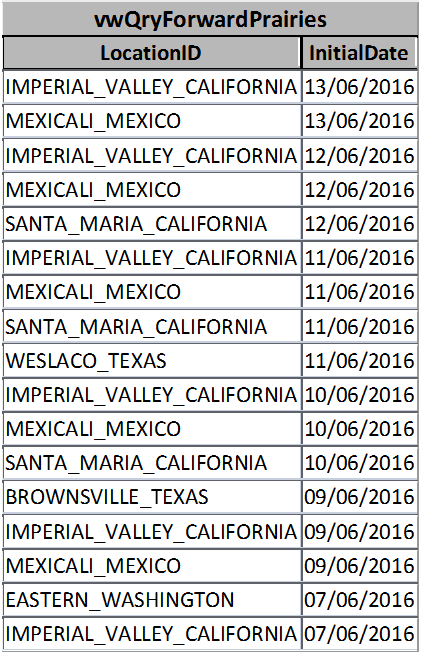 
Downloadable versions of the Wind Trajectory Updates are available here.

Alfalfa Weevil (Hypera postica) – The larval stage of this weevil feeds on alfalfa leaves in a manner that characterizes the pest as a “skeletonizer”.  The green larva featuring a dorsal, white line down the length of its body has a dark brown head capsule and will grow to 9mm long.  Alfalfa growers are encouraged to check the Alfalfa Weevil Fact Sheet prepared by Dr. Julie Soroka (AAFC-Saskatoon).

Updated – Degree-day maps of base 9°C are now being produced by Soroka, Olfert, and Giffen (2016) using the Harcourt/North Dakota models.  The aim or the modelling is to predict the development of Alfalfa weevil (Hypera postica) across the prairies and to help growers time their in-field scouting as second-instar larvae are predicted to occur.  Compare the following predicted development stages and degree-day values copied below (Soroka 2015) to the map below. 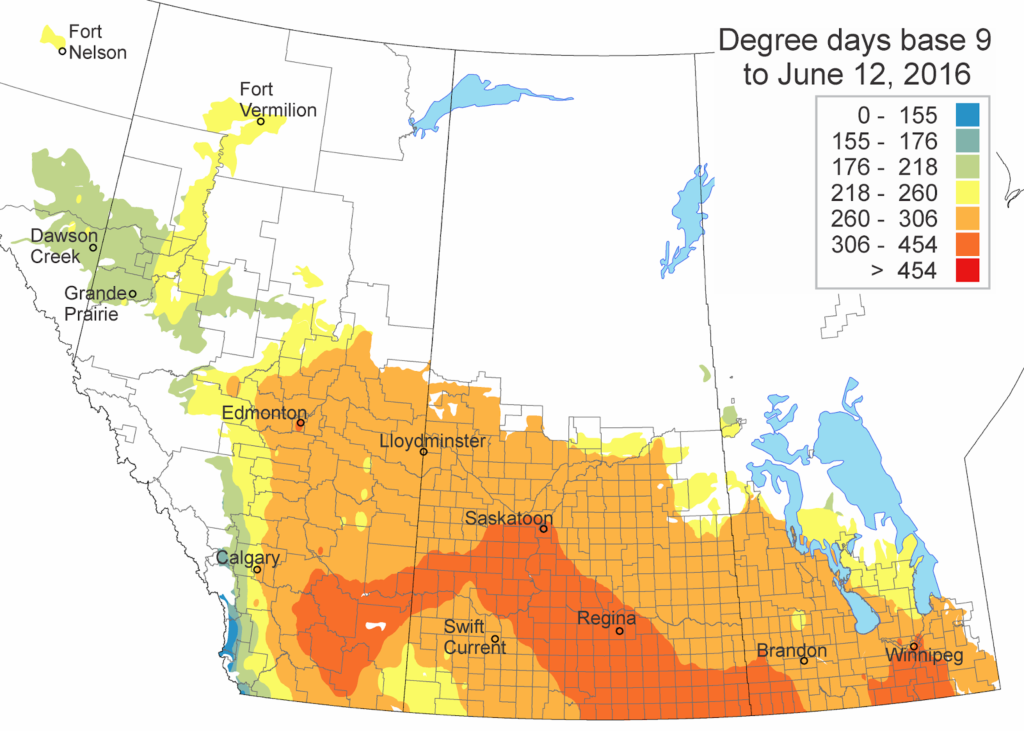 
In hay fields, forage losses can be economic if one or more of the following syptoms are noted:
● if 25-50 % of the leaves on the upper one-third of the stem show damage, or
● if 50-70% of the terminals are injured, or
● if 1 to 3 third or fourth instar larvae occur per stem (with shorter stems having lower economic thresholds and 3 or more larvae requiring treatment no matter what the alfalfa height), or
● 20-30 larvae per sweep occur when 12% leaf loss is acceptable.
● Also consider these two points:
1. Early cutting of the first growth of alfalfa or insecticide treatment will reduce alfalfa weevil populations.
2. If the hay crop value is high and weevil injury is seen or 2 or more larvae per stem reappear in regrowth after cutting, insecticide may be necessary (if a second cut is anticipated).

In alfalfa seed fields:
● Economic thresholds are 20-25 third to fourth instar larvae per sweep or 35-50% of the foliage tips showing damage.
● Thresholds increase with the height of the alfalfa, and decrease in drought conditions.
● Also know that several small wasps parasitize alfalfa weevil larvae and adults, and in the past these natural control agents kept the weevil in check in most years. One of these wasps, Bathyplectes curculionis (Thomson), parasitizes alfalfa weevil in Alberta and Saskatchewan, and is now found in Manitoba.

Insect of the Week – Tetrastichus julis


For information about the cereal leaf beetle (p. 24) and other pests and their natural enemies, see the new Field Crop and Forage Pests and their Natural Enemies in Western Canada – Identification and Management Field Guide for identification, life cycle and conservation options (download links for field guide available on the Insect of the Week page).