Across the prairies, meteorological conditions for the period May 8-15, 2016, were similar to long term average values for the first half of May. 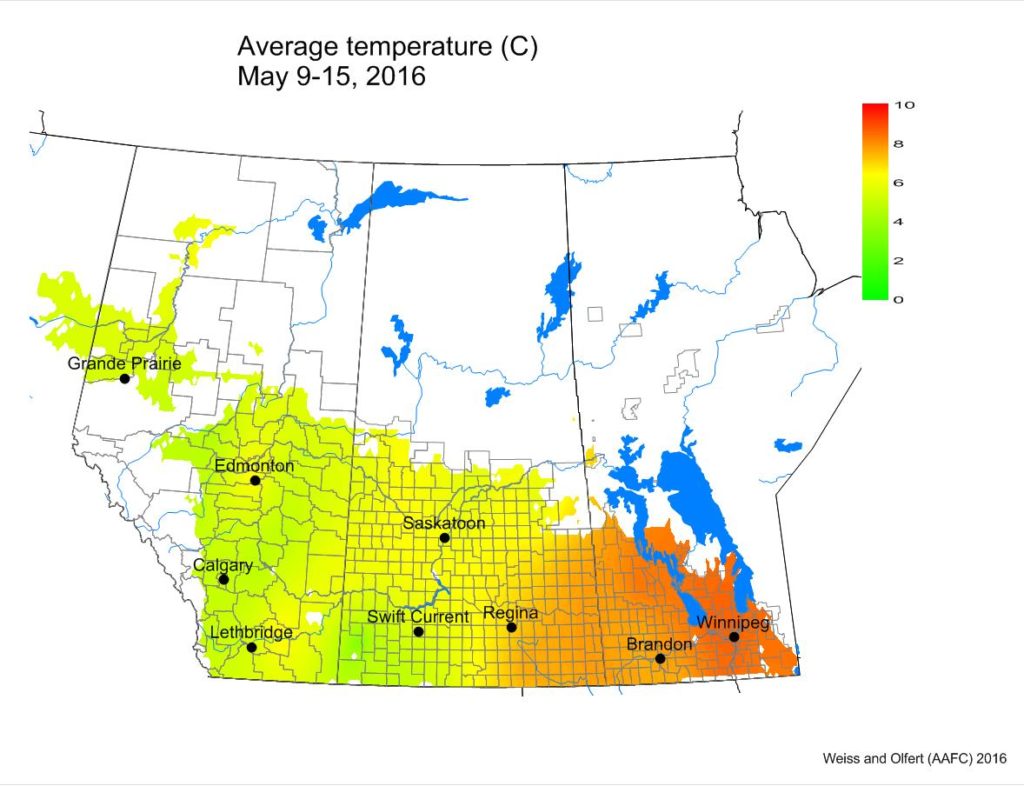 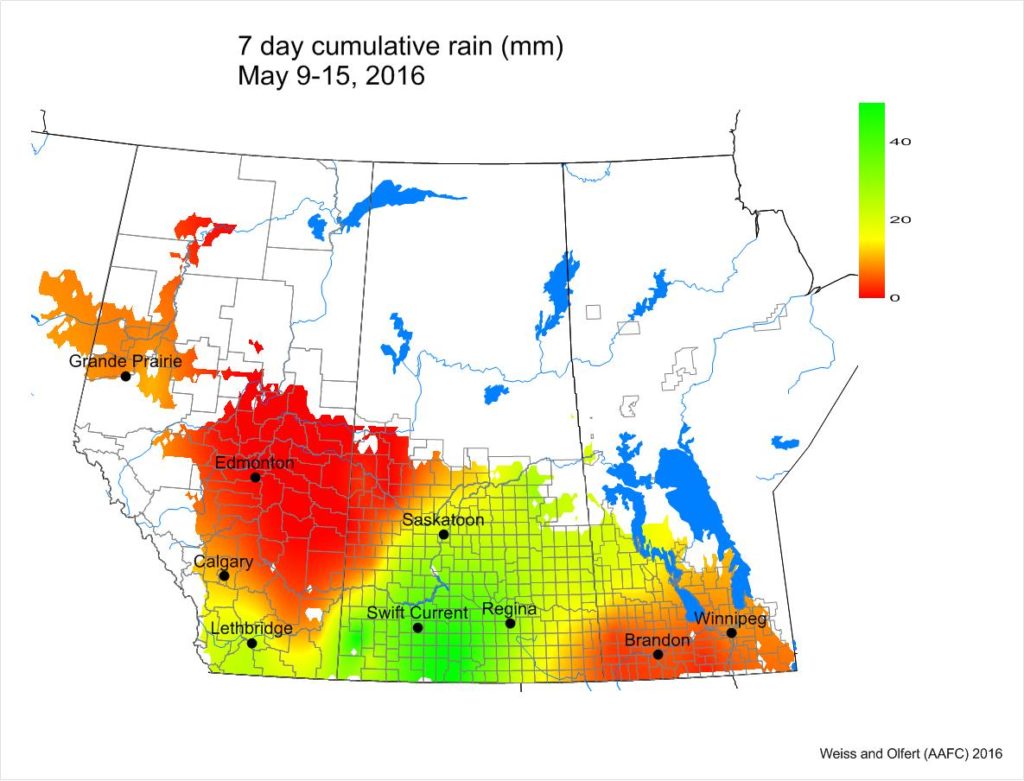 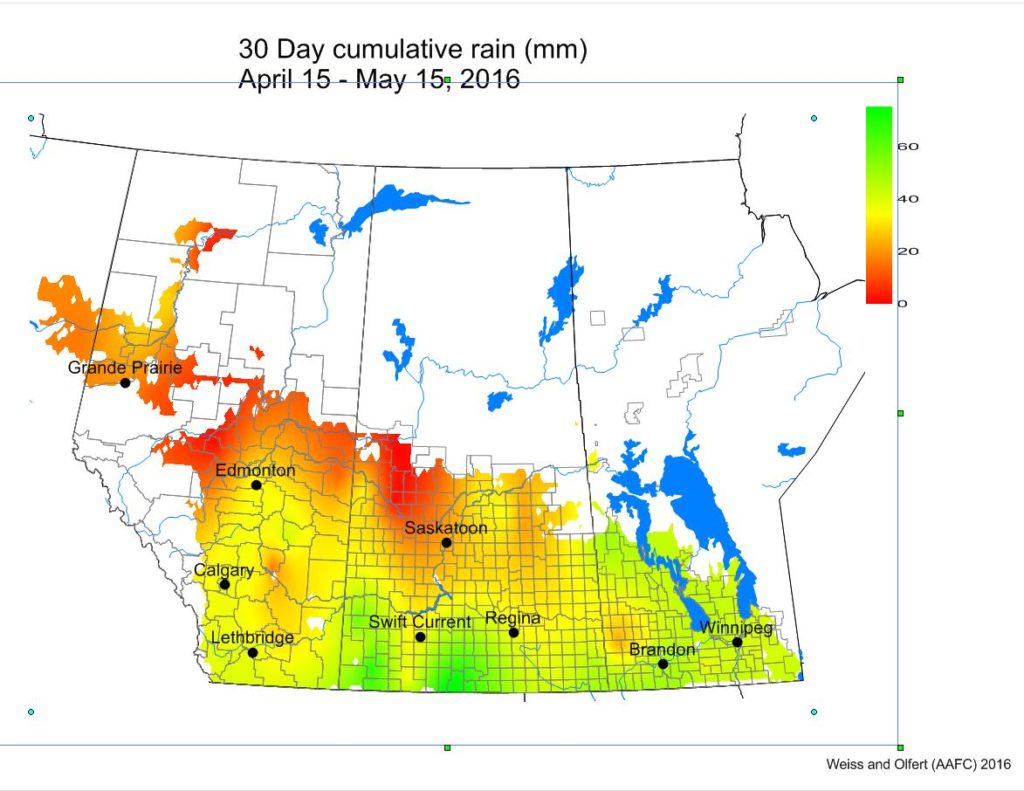 
Unfortunately, there were some cool temperatures just as seedlings were emerging….. The map below reflects the Lowest Temperatures occurring over the past 7 days across the prairies. 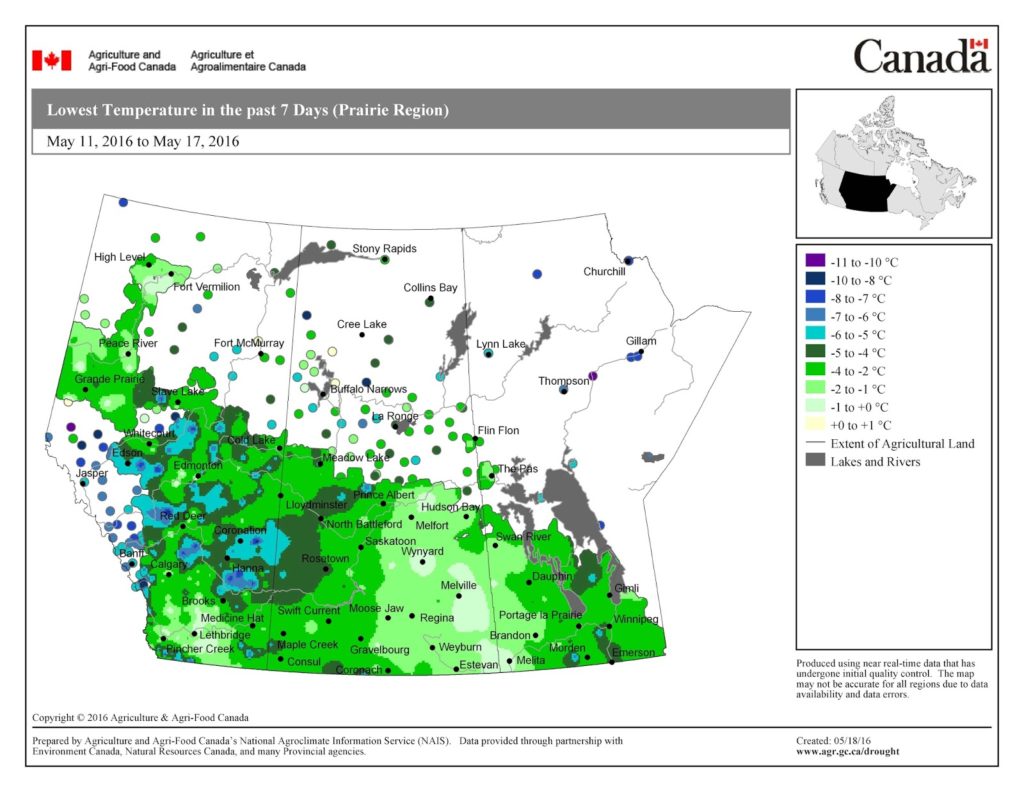 Whereas the map below reflects the Highest Temperatures occurring over the past 7 days across the prairies. 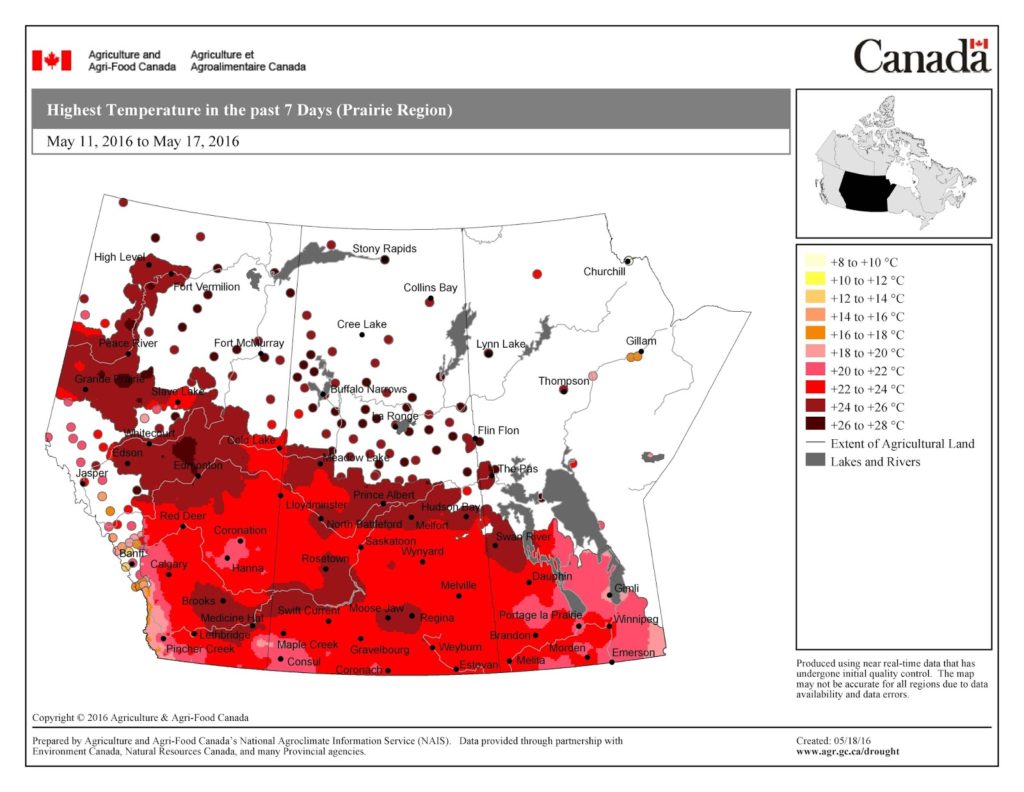 Reverse Trajectories track arriving air masses back to their point of origin while Forward Trajectories predict favourable winds expected to arrive across the Canadian Prairies.


This week, Reverse Trajectories (RT) originating from southwest USA and Mexico have crossed over more than half of the prairie locations (18 of 29 locations). This week, first reports of these RT’s occurred for Russel MB, Gainsborough SK, Yorkton SK, Grenfell SK, Watrous SK, and Kindersley SK. 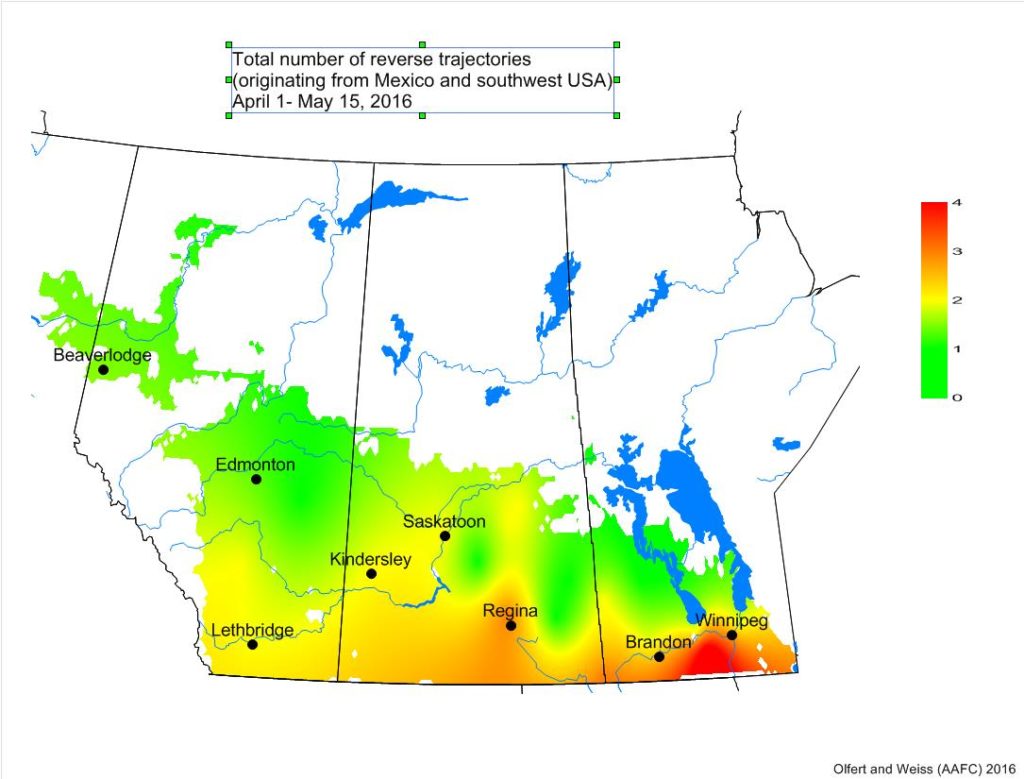 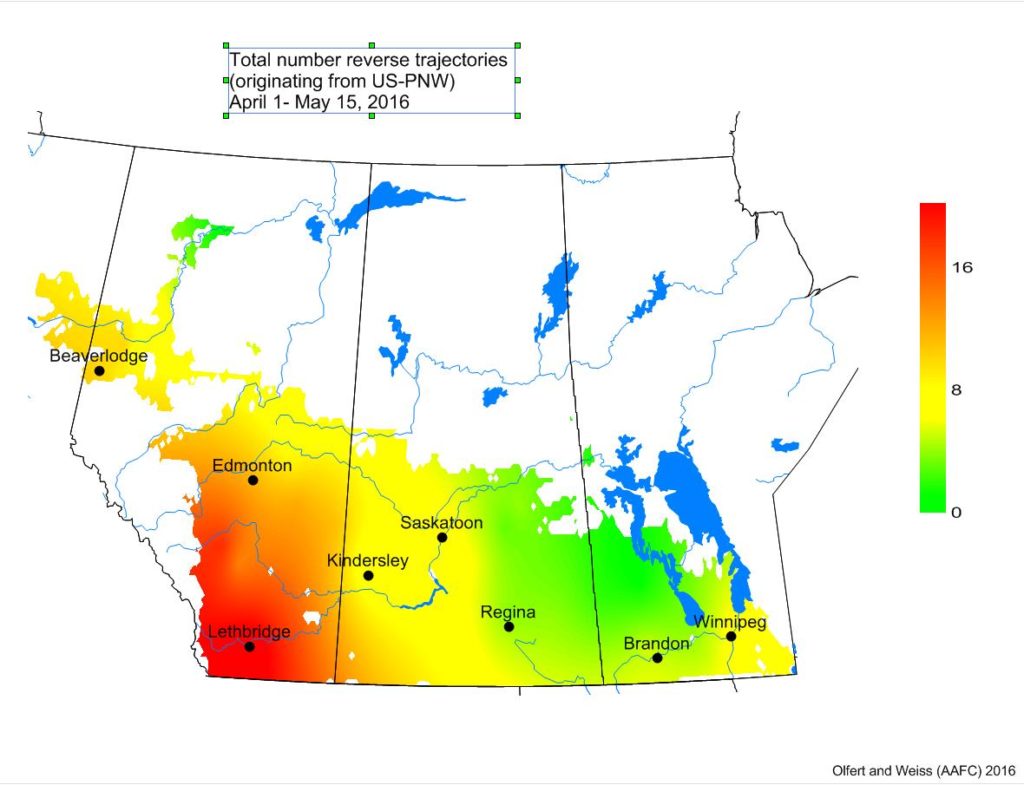 Jennifer Otani
Categories
Week 3
Field scouting is critical because it enables the identification of potential risks to crops.  Canola production systems across the Canadian prairies will suffer insect pest outbreaks.  However, the identification of these insect pests PLUS the application of established monitoring methods will enable growers to make informed pest management decisions.

We first offered the chart below in 2015 but we again post our generalized canola scouting chart to aid in-field scouting on the Canadian prairies. Two versions are below – the first version contains hyperlinks to help growers learn more about some of our insect pests and how to monitor while the second version may be easier to view or print.

Whenever possible, monitor and compare to established economic thresholds so pollinators and beneficial arthropods are preserved.  Economic thresholds, by definition, can help growers avoid crop losses due to an insect pest.

Good luck with the growing season! 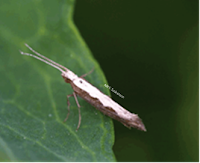 Counts will be reported by the provincial staff in Manitoba and Saskatchewan soon.  Alberta Agriculture and Forestry has posted their live 2016 map reporting Diamondback moth pheromone trap interceptions.  A copy of the map (retrieved May 18, 2016) is below for reference. 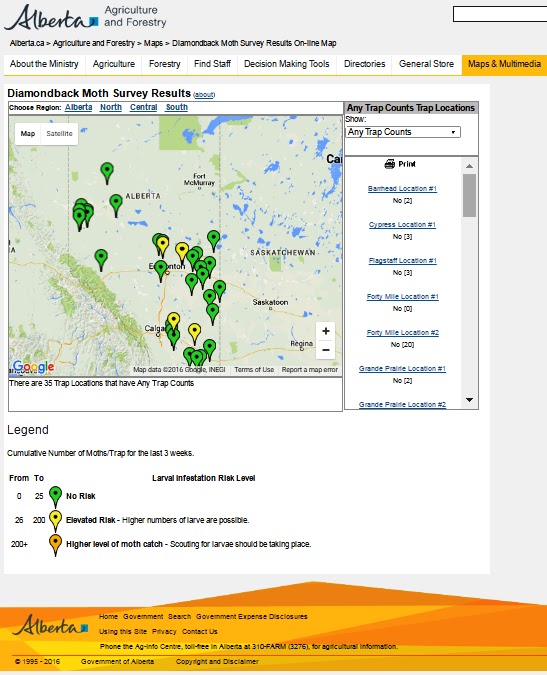 More information about Diamondback moths can be found by accessing the pages from the new “Field Crop and Forage Pests and their Natural Enemies in Western Canada: Identification and Field Guide”.  View ONLY the Diamondback moth page but remember the guide is available as a free downloadable document as both an English-enhanced or French-enhanced version.

Reminder – Flea Beetles (Chrysomelidae: Phyllotreta species) – Be on the lookout for flea beetle damage resulting from feeding on canola cotyledons but also on the stem. 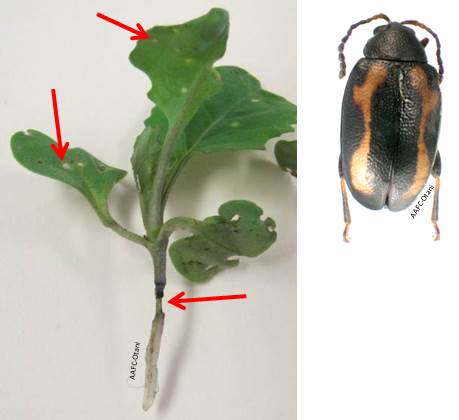 Remember, the Action Threshold for flea beetles on canola is 25% of cotyledon leaf area consumed.  Shot-hole feeding is the traditional damage in seedling canola but watch the growing point and stems of seedlings.


Estimating flea beetle feeding damage can be challenging.  Using a visual guide to estimate damage can be helpful.  Canola Watch circulated this article but also use the images (copied below for reference) produced by Dr. J. Soroka (AAFC-Saskatoon)  – take it scouting!

Refer to the flea beetle page from the new “Field Crop and Forage Pests and their Natural Enemies in Western Canada: Identification and management field guide” as an English-enhanced or French-enhanced version.

Reminder – Cutworms (Noctuidae) – Keep an eye on fields that are “slow” to emerge, are missing rows, include wilting or yellowing plants, have bare patches, or appear highly attractive to birds – these are areas warranting a closer look.  Plan to follow-up by walking these areas later in the day when some cutworm species move above-ground to feed.  Start to dig below the soil surface (1-5 cm deep) near the base of a symptomatic plant or the adjacent healthy plant.  If the plant is well-established, check within the crown in addition to the adjacent soil.  The culprits could be wireworms or cutworms.

Several species of cutworms  can be present in fields.  They range in colour from shiny opaque, to tan, to brownish-red with chevron patterning.  Cutworm biology, species information, plus monitoring recommendations are available in the Prairie Pest Monitoring Network’s Cutworm Monitoring Protocol.  Also refer to Manitoba Agriculture and Rural Initiatives cutworm fact sheet which includes action and economic thresholds for cutworms in several crops.

A screen shot of the live map has been retrieved (18May2016) below for your reference. 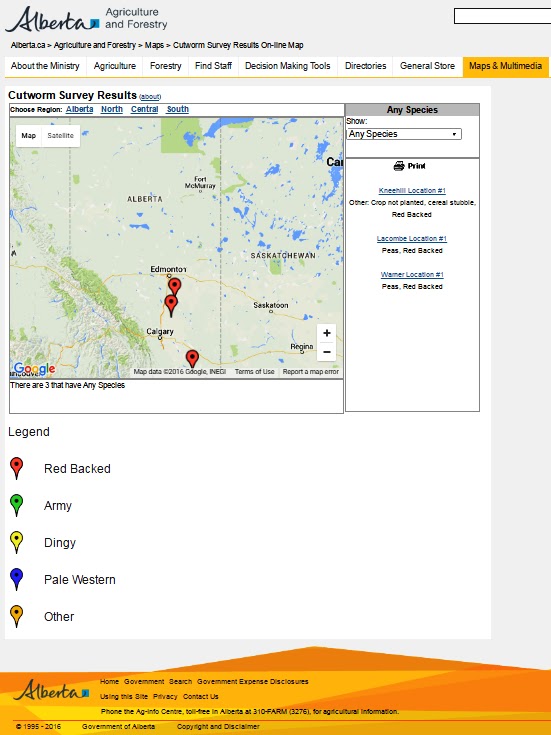 The pea leaf weevil resembles the sweet clover weevil (Sitona cylindricollis) yet the former is distinguished by three light-coloured stripes extending length-wise down thorax and sometimes the abdomen (Access the Pea leaf weevil monitoring protocol).  All species of Sitona, including the pea leaf weevil, have a short snout. 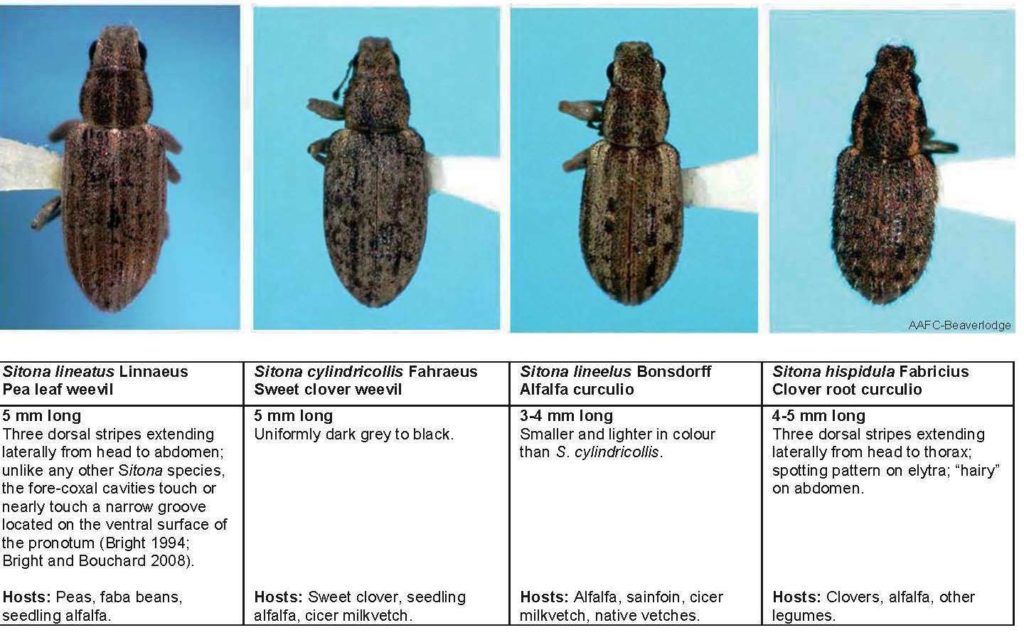 Adults will feed upon the leaf margins and growing points of legume seedlings (alfalfa, clover, dry beans, faba beans, peas) and produce a characteristic, scalloped (notched) edge.  Females lay 1000 to 1500 eggs in the soil either near or on developing pea or faba bean plants from May to June.


Information related to Pea leaf weevil in Alberta and the forecast for 2016 is posted here.


As of May 15, 2016, the CLB model indicated that oviposition is well underway, though this week’s development was slower than the previous week. Model output predicted that egg populations should be peaking this week in both Alberta and Saskatchewan and next week at Swan River  MB. Larval populations are predicted to peak in mid-June in southern Alberta and Saskatchewan and one week later at Swan River MB locations.


Predicted dates of peak emergence of CLB eggs and larvae:

The following model outputs have been updated this week and reflect the predicted stages of CLB present in fields in relation to its parasitoid, Tetrastichus julis.

Fact sheets for CLB are published by the province of Alberta and by the Prairie Pest Monitoring Network. Also access the Oulema melanopus page from the new “Field crop and forage pests and their natural enemies in western Canada – Identification and management field guide”. 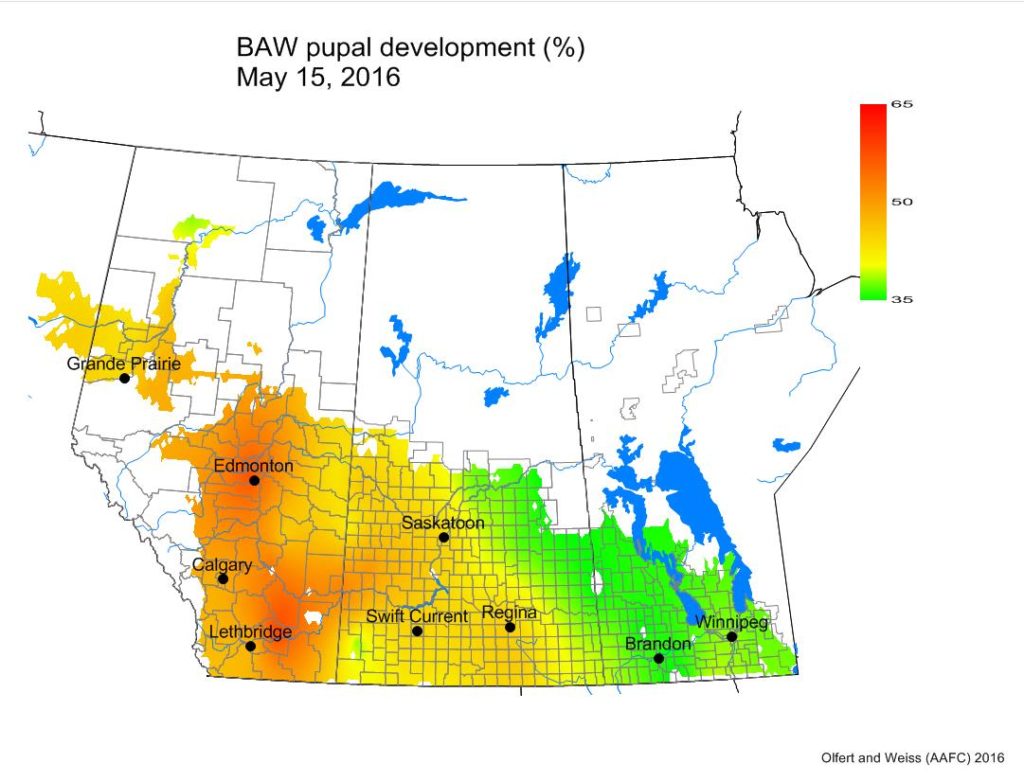 Provincial entomologists provide insect pest updates throughout the growing season so we have attempted to link to the most recent information provided by them:

Grasshoppers (Acrididae) – Cooler conditions over the past seven days resulted in a return to average grasshopper development.


For the week of May 8-15, 2016, the predicted mean embryological development was 75% (last week was 74%).  Grasshopper egg development is greater than 80% across most of southern and central Alberta indicating that hatch will rapidly progress over the next two weeks within the areas highlighted in red on the map below. The model predicted that 5% of the hatch is already underway. Peak hatch (approx. 16%) was predicted to occur in the area around Alsask SK to Hanna AB and south to Brooks and Vauxhall AB. 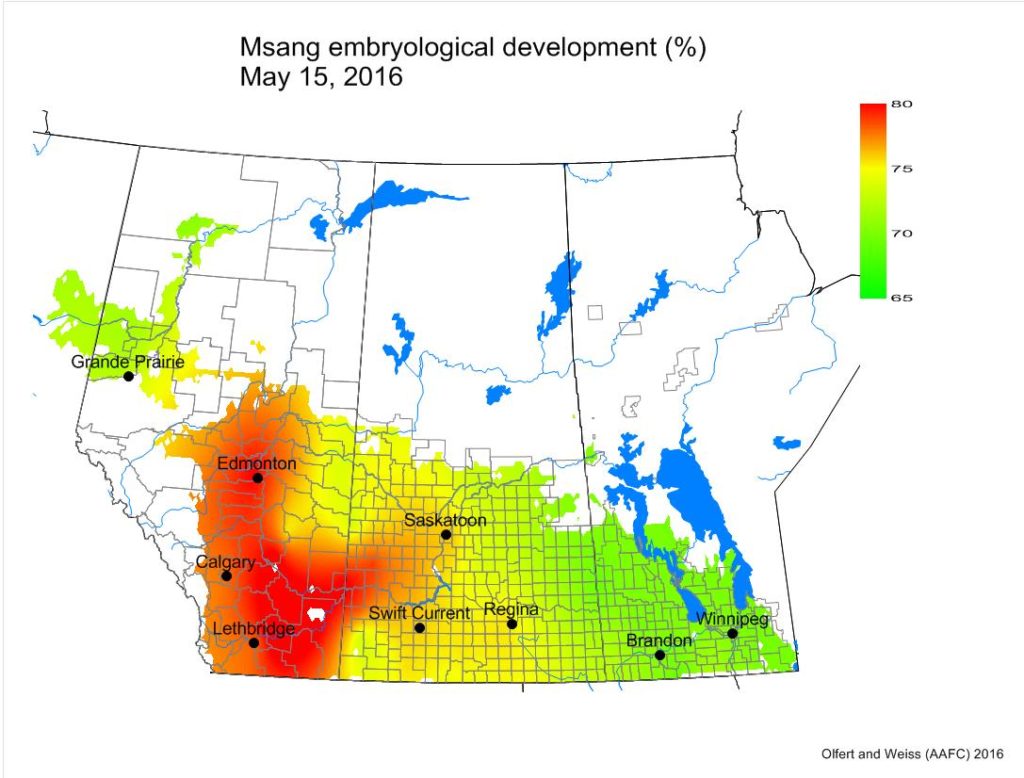 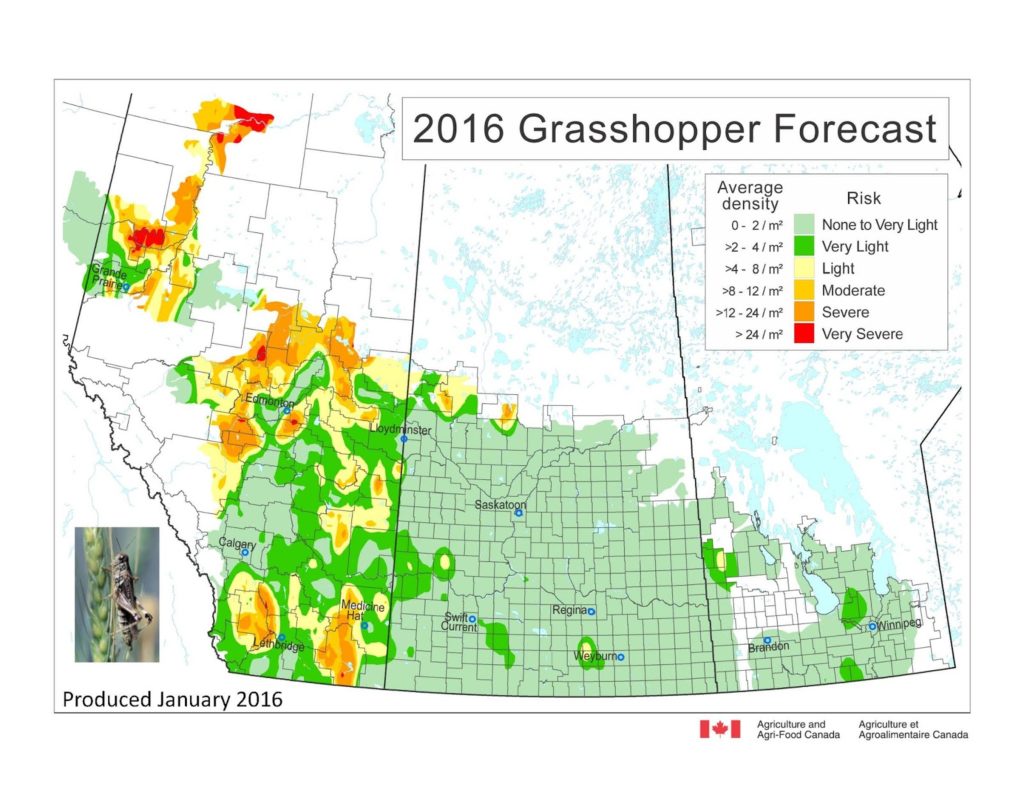 A downloadable PDF version of the complete Weekly Update for Week 3 (May 18, 2016) can be accessed here.