This is the last Weekly Update of the 2016 growing season!  Many thanks to everyone who helped prepare the various sections and insect pest updates for the past 17 weeks! Thanks to those of you who monitor and good luck with harvest!

A downloadable PDF version of the complete Weekly Update for Week 17 (August 24, 2016) can be accessed here.


Subscribe to the Blog by following the instructions posted here!  Receive automatic updates during the fall and winter months in your inbox.

Pre-Harvest Interval (PHI) -Reminder – Growers with late-season insect pest problems will need to remember to factor in the PHI which is the minimum number of days between a pesticide application and swathing or straight combining of a crop.

The PHI recommends sufficient time for a pesticide to break down and a PHI-value is both crop- and pesticide-specific.  Adhering to the PHI is important for a number of health-related reasons but also because Canada’s export customers strictly regulate and test for the presence of trace residues of pesticides.

An excellent summary of PHI for various pesticides in their various crops was posted by Saskatchewan Agriculture this week within their Crop Production News.


In 2013, the Canola Council of Canada created and circulated their “Spray to Swath Interval Calculator” which was intended to help canola growers accurately estimate their PHI.  Other PHI are described in your provincial crop protection guides and remember that specific crop x pesticide combinations will mean different PHIs.  More information about PHI and Maximum Residue Limits (MRL) is available on the Canola Council of Canada’s website.

Dr. Meghan Vankosky started her position as a research scientist with Agriculture and Agri-Food Canada at the Saskatoon Research and Development Centre on July 18, 2016. Most recently, Meghan worked as a postdoctoral scholar at the University of California, Riverside. Her work there focused on establishing a release program for a parasitoid used for biological control of the Asian citrus psyllid in southern California, and on studying the competitive interactions of that parasitoid with another primary parasitoid of the pest. In the past, Meghan studied the behavior and life history of an omnivore used for biological control at the University of Windsor in Ontario (Ph.D., 2010-2015), and integrated pest management strategies and biological control of the pea leaf weevil at the University of Alberta (M.Sc., 2008-2010).


As a field crop entomologist with AAFC, Meghan hopes to develop a strong IPM-based research program that focuses on understanding insect pests and developing sustainable management programs that will benefit both producers and the environment. She currently plans to investigate the impact of the pea leaf weevil and assess management options for this pest in Saskatchewan. She will also be involved with a project studying the life history and impact of the swede midge in canola crops in the Prairies. 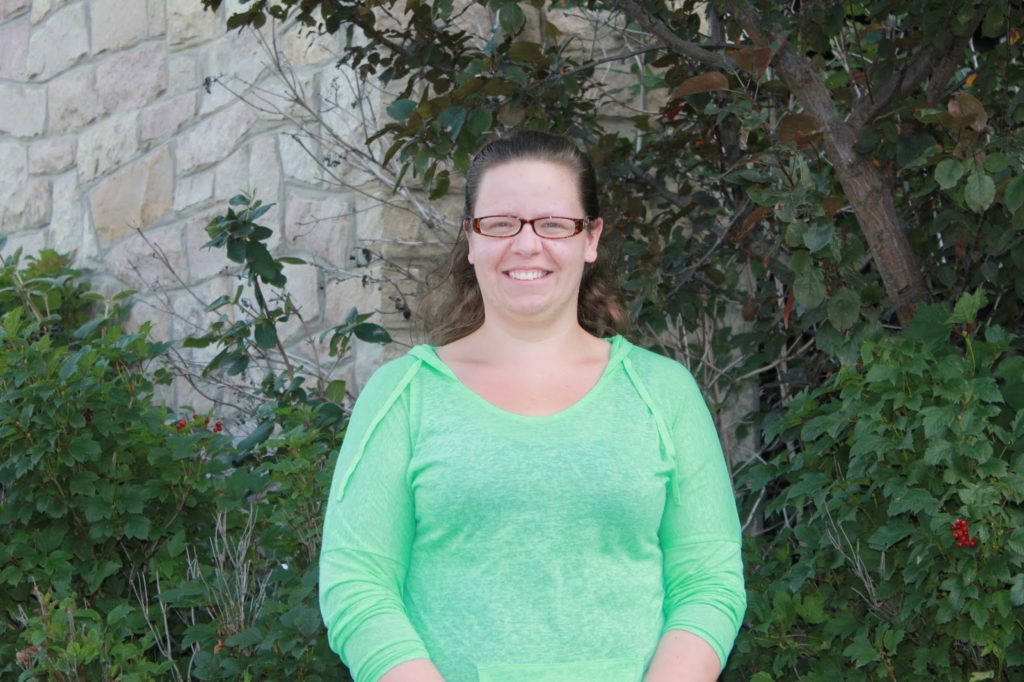 Dr. Boyd Mori – (Research Scientist – Entomology) Boyd completed his PhD in 2014 at the University of Alberta on pheromone monitoring and management of the red clover casebearer (Coleophora deauratella) moth in the Peace River region of Alberta. He then undertook a Postdoctoral Fellowship at the Swedish University of Agricultural Sciences (Alnarp, Sweden) where he researched the chemical ecology of the highly invasive spotted wing fruit fly (Drosophila suzukii) with a focus on alternative pest management strategies. Boyd joined AAFC-Saskatoon in April 2016.

Boyd’s primary project will be on the ecology of swede midge-host plant interactions, where he aims to identify host plant resistance mechanisms against the swede midge, a potentially significant pest of canola. He is a strong proponent of integrated pest management and has a robust background in insect behaviour and physiology which he uses to develop monitoring and management tools for insect pests. 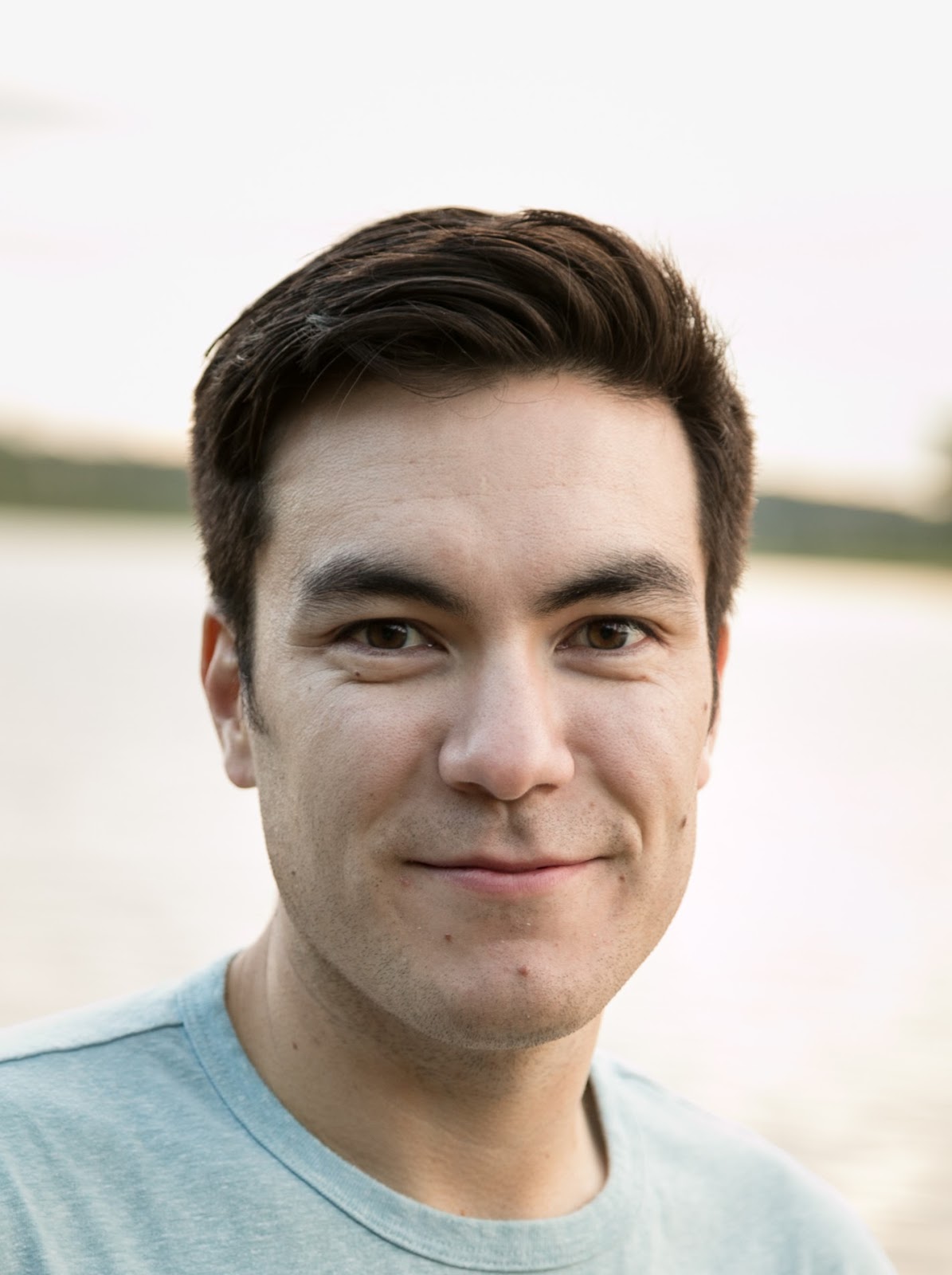 As of March 2020, Dr. Mori took an Assistant Professor position with the University of Alberta. He can be reached at bmori@ualberta.ca

Dr. Tyler Wist spent his early insect years killing mosquitoes before studying pollinators in Echinacea crops for his M.Sc. with Dr. Art Davis at the University of Saskatchewan. A Ph.D. from the University of Alberta with Dr. Maya Evenden taught him the unseen world of insect chemical ecology, and invasion dynamics and the parasitoid complex of a recently introduced lepidopteran pest, the ash leaf coneroller. Drs. Chrystel Olivier and Owen Olfert brought him in on an NSERC Visiting Fellowship on the cereal aphid project and then had him chasing leafhoppers in cereal and canola crops.  Tyler is the current President of the Entomological Society of Saskatchewan and has begun a research scientist position at Agriculture and Agri-Food Canada’s Research and Development Centre in Saskatoon as a Field Crop Entomologist on January 25th 2016.


Tyler is working on developing a dynamic action threshold for cereal aphids that incorporates the predatory pressure of natural enemies, determining the economic threshold and effect of landscapes on flea beetles in newer, hybrid canola varieties, and tracking aster leafhopper populations and aster yellows infection in canola and cereal crops.  He is also investigating new integrated pest management tools for wheat midge and chasing Lygus bugs in canola and aphids in pulse crops.

Time of Swathing for Canola

The Canola Council of Canada created a guide to help growers estimate swathing time in canola.  A screen shot of the downloadable Canola Swathing Guide has been included below for reference. 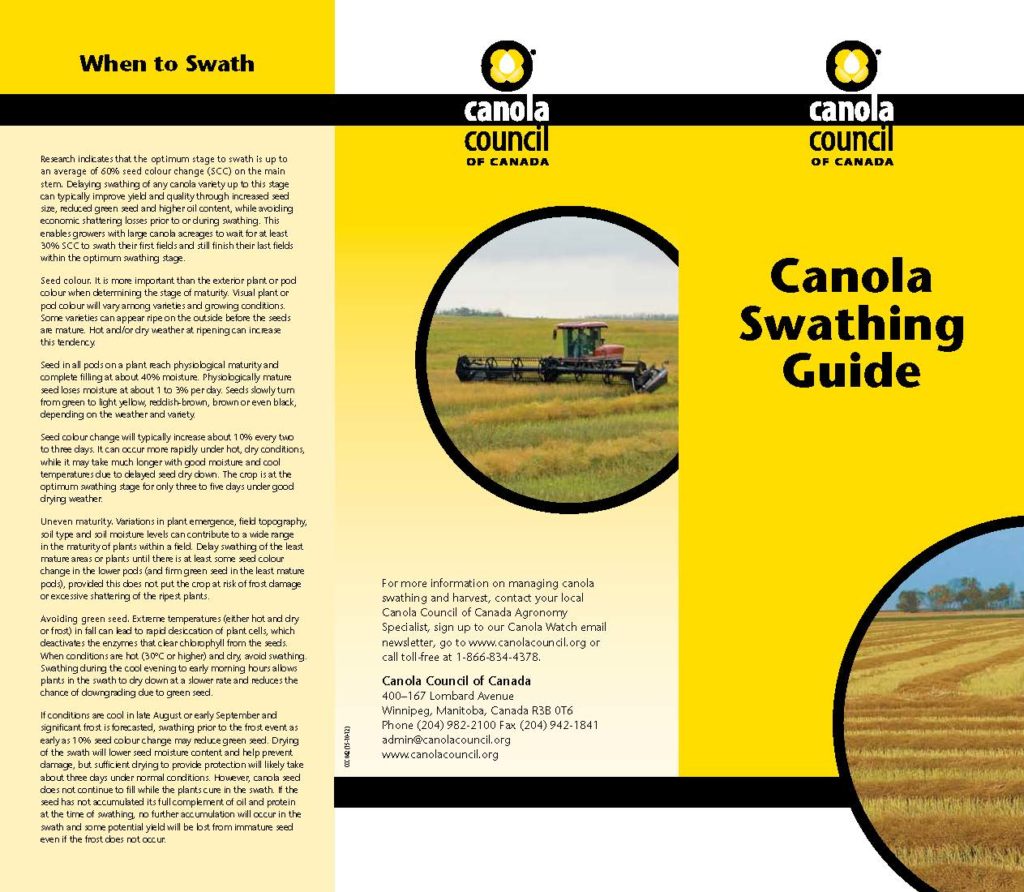 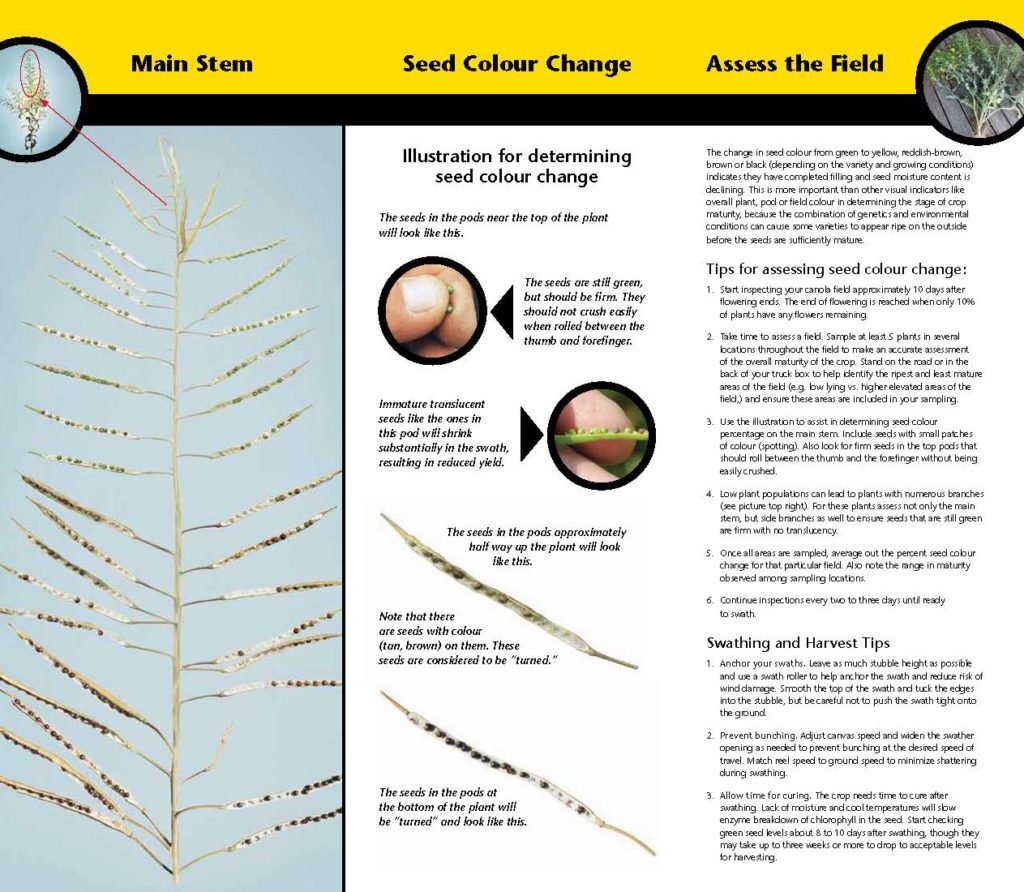 The Canadian Grain Commission is ready and willing to grade grain samples harvested in 2016.  Samples are accepted up to November but send samples as soon a harvest is complete. 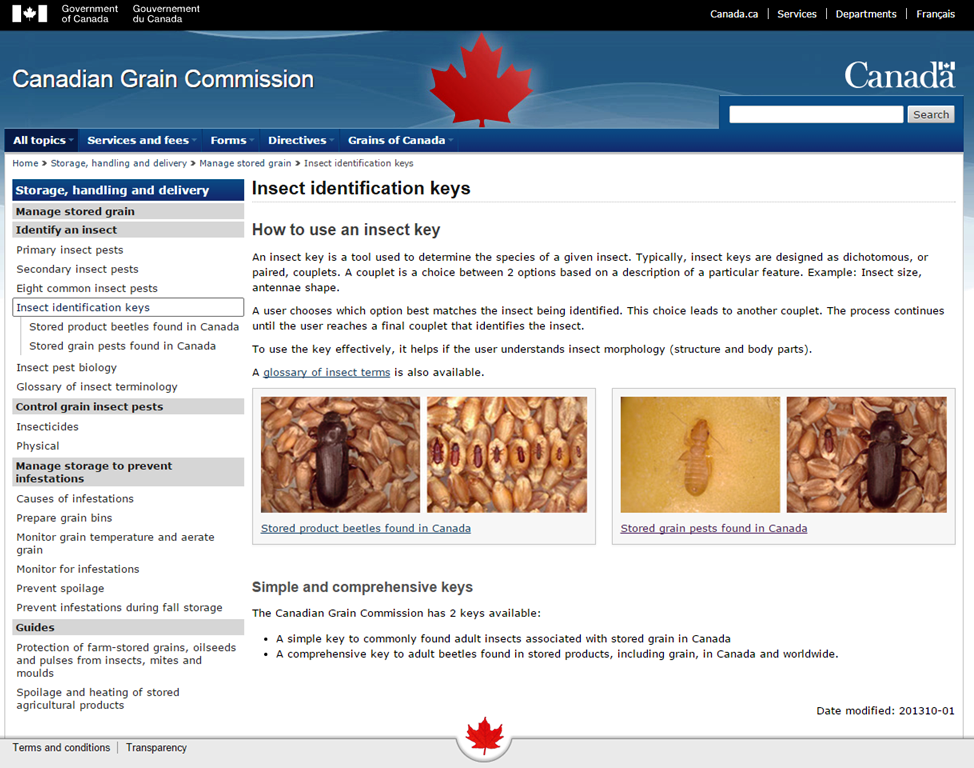 Upcoming Meetings and Conferences – The following agricultural insect pest-related meetings and conferences are scheduled for this year:


• October 2016:  The annual meeting of the Entomological Society of Alberta will be held at Calgary AB.  Details will be posted soon at: http://www.entsocalberta.ca/esa.htm


• October 21, 2016:  The Canadian Forum for Biological Control will meet immediately following the Western Forum on Pest Management at Saskatoon SK the afternoon of October 21, 2016.


• October 28-29, 2016:  The annual meeting of the Entomological Society of Manitoba will be held at Winnipeg MB.  Details can be found at: http://home.cc.umanitoba.ca/~fieldspg/meet.html


• January 9-11, 2017:  CropSphere Agricultural Conference will be held at Saskatoon SK.  More information is available at: http://www.cropsphere.com/


• January 17-19, 2017: The Manitoba Ag Days show will be held at Brandon MB. More information will be available at: https://www.agdays.com/


Iceburg reports
Insects in our diet

The map below shows the Lowest Temperatures the Past 7 Days (August 17-23, 2016) across the prairies: 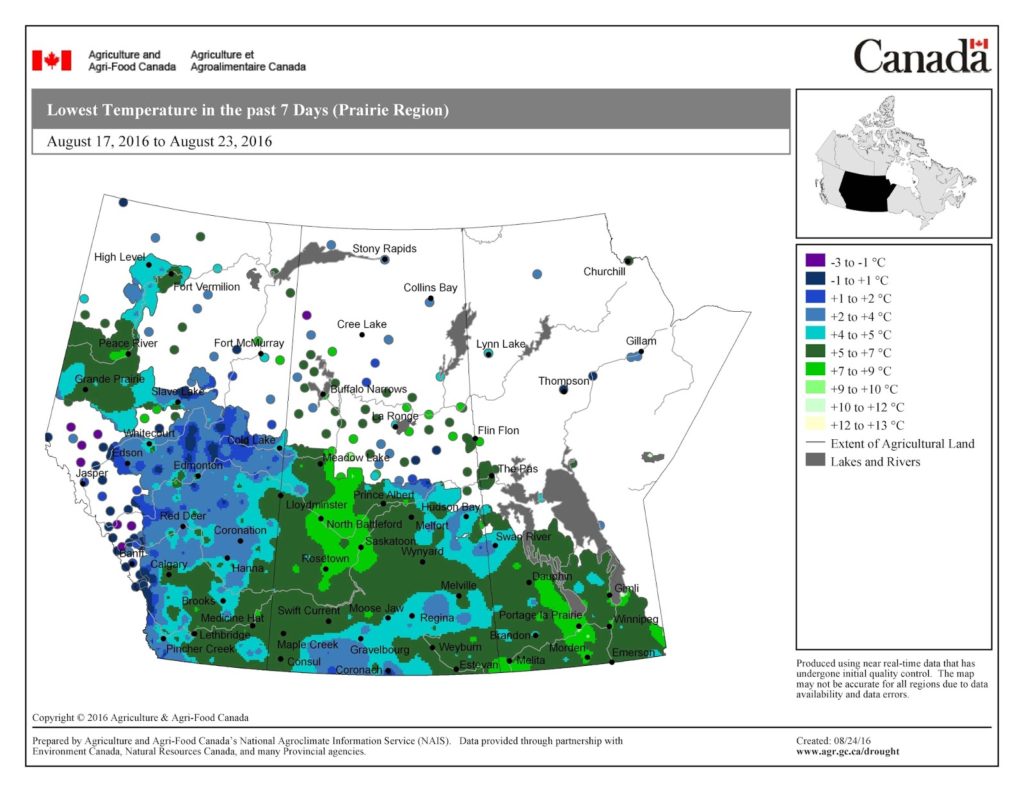 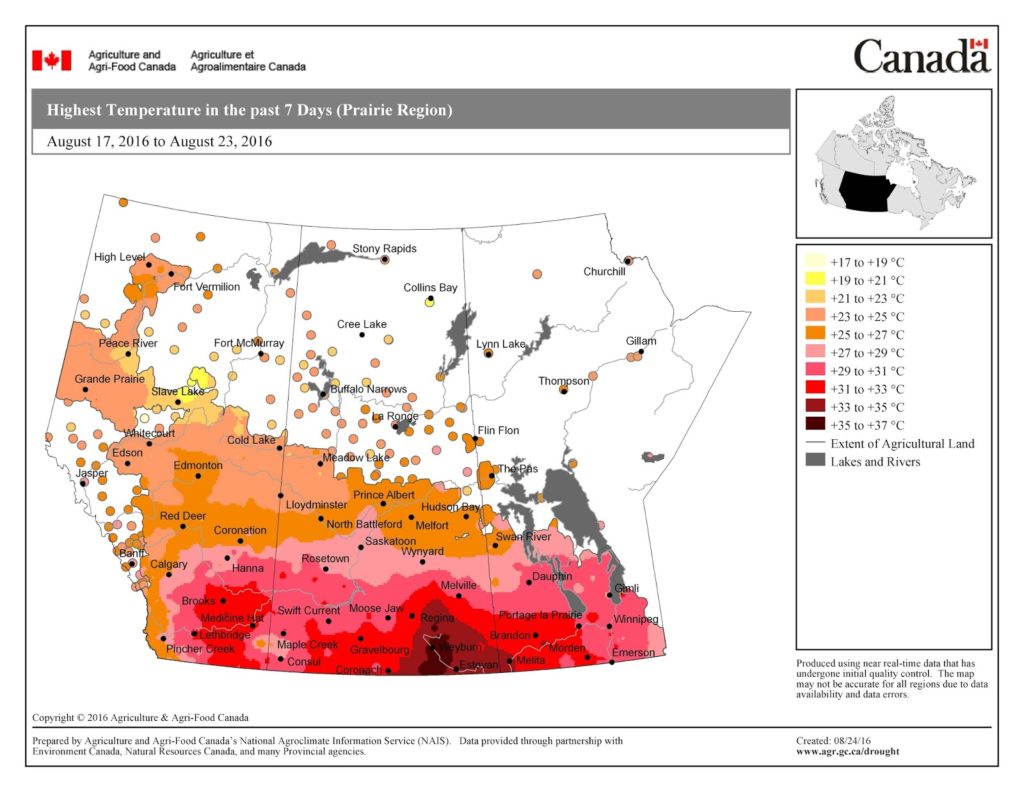 Dr. Haley Catton joined AAFC-Lethbridge as a Research Scientist in Cereal Crop Entomology in April 2016. With a diverse background in studying trees, weeds, native plants, insects, and mammals, Haley specializes in population biology, insect-plant interactions, biological control, field experimentation and analysis of large data sets. Originally from Winnipeg, Haley earned a B.Sc. (Agriculture) and M.Sc. (Plant Science) from the University of Manitoba, a Ph.D. (Insect-Plant Interactions) from the University of British Columbia Okanagan, and conducted postdoctoral research at the University of Lethbridge. Her research program at AAFC will draw from all of these experiences to focus on pest and beneficial insects in cereal crops on the prairies. Her target pests range from established problems like wheat stem sawfly and wireworm to emerging pests such as the invasive cereal leaf beetle.


Haley wants to connect with producers and hear about your priorities for research. Follow her on Twitter at @haleycatton or reach her at haley.catton@agr.gc.ca or 403.317.3404. Fair warning: Haley is a diehard Blue Bombers fan… Saskatchewan Roughriders fans beware. 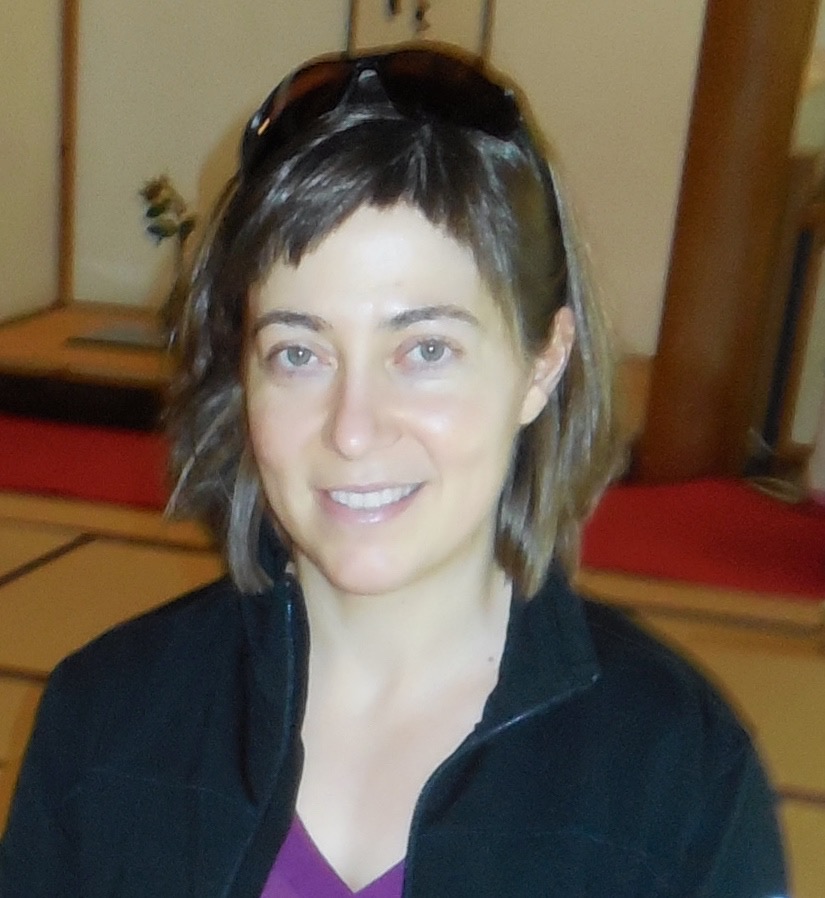 West Nile Virus Risk –  The regions most advanced in degree-day accumulations for Culex tarsalis, the vector for West Nile Virus, are shown in the map below.  As of August 21, 2016, areas highlighted in yellow, orange, or red on the map below have accumulated sufficient heat for C. tarsalis to fly so wear your DEET to stay protected! 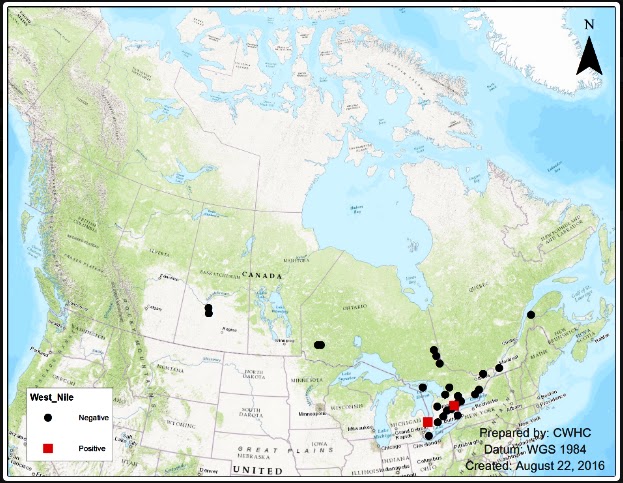 The Canadian Wildlife Health Cooperative compiles and posts information related to their disease surveillance for West Nile Virus.  As of August 22, 2016, 36 birds were submitted for testing and two have tested positive for West Nile virus in Ontario.

– Alberta Agriculture and Forestry (for August 16, 2016) which also posts a printer-friendly version.

The USDA also produces a World Agricultural Production Report (August 2016) which estimates production across the globe for corn, cotton, rapeseed, and wheat but also includes tabular data for other grains.