Please be patient – we are working to archive and update the Blog in preparation for the 2018 growing season.

Old bookmarks may be rendered obsolete by our efforts but please try either our “Search this Blog” function (located to the right of this Post) OR please scan our “Label” list by scrolling down this page and looking along the lower right of this screen.  All our information is still here but you may need to update your bookmark.

Thank you for your patience!


We’ve updated a few items on the Blog this week!  Please take a moment to review the short series of Blog Posts put up today.

Winter Update – Why we exist, who we are and a few other things….

NEW – The Blog has been updated with an “About Us” Page.  Readers can find information about the Prairie Pest Monitoring Network and its supporters.  Additional information concerning accessing the Blog’s information and its intent is also posted on this Page.

The “viewable” PDF versions of the 2017 Weekly Updates will come down at the end of December 2017 on our WEEKLY UPDATE Page.  At the beginning of January 2018, we will archive those files and reduce them to a series of hyperlinks.  That activity may affect people who bookmarked the specific PDF during the growing season!

Rest assured, all the PDFs for 2015, 2016 and 2017 will still be available after December 31st  – just return to the Weekly Update page and scroll down to access the appropriate hyperlink.

Researchers at Agriculture and Agri-Food Canada’s Saskatoon Research and Development Centre (SRDC), along with colleagues at the University of Guelph, Alberta Agriculture and Forestry, and the Canadian Food Inspection Agency found a new insect damaging canola in northeastern Saskatchewan and east-central Alberta. The new species, a midge, which has yet to be named and scientifically described, belongs to the genus Contarinia. It is similar in appearance to the swede midge, Contarinia nasturtii, commonly found in Ontario.

Currently, the only confirmed symptom of damage by this insect are “bottle”-shaped galled flowers that form as a result of larval feeding inside flowers. Damaged flowers do not produce pods or seeds. 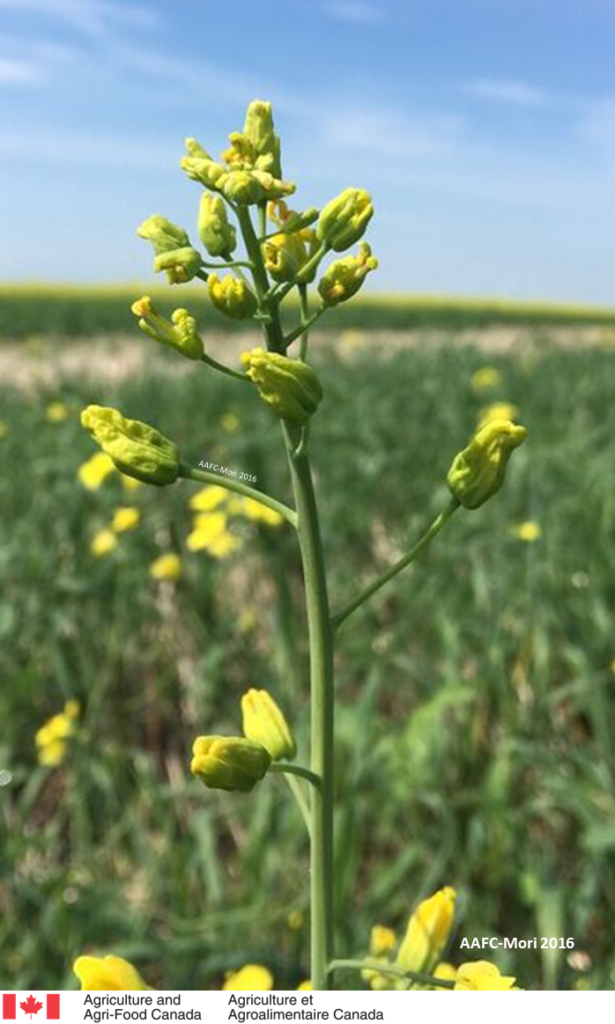 How the new species was confirmed
For years there have been accounts of differences between swede midge populations in Saskatchewan and Ontario, including adult size, the number of generations per year, and the type and amount of damage reported. These hints, combined with extremely low capture rates of adult swede midge in pheromone-baited traps in Saskatchewan despite apparently high rates of adult swede midge emergence caught the attention of Dr. Boyd Mori, a trained chemical ecologist and new research scientist at the SRDC.

Dr. Mori collected adult midges from soil emergence cages and reared larvae found in infested flowers. The resulting adult midges were sent to preeminent North American swede midge researchers at the University of Guelph, Dr. Rebecca Hallett and James Heal who immediately noticed differences between the midge from Saskatchewan and swede midges from Ontario: midges from Saskatchewan were more robust, had hairier wings and had slight differences in the antennae and genitalia compared to the swede midge.

These differences were confirmed by midge expert Dr. Bradley Sinclair with the Canadian Food Inspection Agency in Ottawa who also found several other physical differences. Using morphological differences, and DNA sequencing, the researchers concluded that the Saskatchewan midges were a separate species from the swede midge.

Economic Importance
While midge damage observed in Saskatchewan in 2016 appeared to be low in most fields, the economic impact of the new Contarinia midge is not known. Understanding pests and pest management is a priority of Agriculture and Agri-Food Canada and work is underway to formally describe and name this new species.

The Canadian Grain Commission holds and generates a wealth of information related to harvest in Canada AND they have one of the best Stored Product Pest online resources which includes a photographic identification key plus grain management tips.


It doesn’t matter if you’re an entomologist, an agrologist, or one of our hard-working growers – we all pay attention to harvest and here’s what the CGC is able to share with us as of October 27, 2016:

Upcoming Meetings and Conferences – The following agricultural insect pest-related meetings and conferences are scheduled for this year:

• October 19-21, 2016:  The Western Forum on Pest Management 2016 meets at Saskatoon SK.  Check http://www.westernforum.org/WCCPAnnualMeeting.html for more information.  You can review the Western Committee on Crop Pests agenda and watch for the Western Committee on Plant Diseases agenda to be posted on the homepage.  Registration for this event is online and accessible here.

• October 21, 2016:  The Canadian Forum for Biological Control will meet immediately following the Western Forum on Pest Management at Saskatoon SK the afternoon of October 21, 2016.

• October 27-29, 2016:  The annual meeting of the Entomological Society of Alberta will be held at Calgary AB.  Details are posted at: http://www.entsocalberta.ca/annmeet.htm


• October 28-29, 2016:  The annual meeting of the Entomological Society of Manitoba will be held at Winnipeg MB.  Details have been posted at: https://home.cc.umanitoba.ca/~fieldspg/index.html

• January 9-11, 2017:  CropSphere Agricultural Conference will be held at Saskatoon SK.  More information is available at: http://www.cropsphere.com/

• January 17-19, 2017: The Manitoba Ag Days show will be held at Brandon MB. More information will be available at: https://www.agdays.com/

Alberta Agriculture and Rural Development requested that DBM pheromone traps be deployed in fields at the end of April owing to the relatively warm field conditions.  Refer to this link to view the 2015 Alberta Diamondback Moth Pheromone Trap Reporting Map.

April 24, 2015 – A field update from Dr. J. Soroka of AAFC-Saskatoon reports sightings of her first striped flea beetles of the year on yellow sticky card traps set out from April 10-17, 2015.  She also noted that she spotted her first Diamondback moth of the season on the same trap type that was deployed in a shelterbelt on the AAFC Research Farm in Saskatoon from April 17-24, 2015.  Dr. Soroka noted that, “The DBM moth did not appear pristine but neither did it appear to have hitchhiked from Mexico”.